Not now, but probably later… if at all. The thing is, you’re patient and you can wait. It’ll happen eventually, one way or the other, and you’re fine with things as they are in the meantime. You’re good. Whatever you hope for, it’s possible – except when, as in the new novel “Someday, Maybe” by Onyi Nwabineli, life has other plans.

She prayed that he hadn’t read the last texts she sent to his phone. 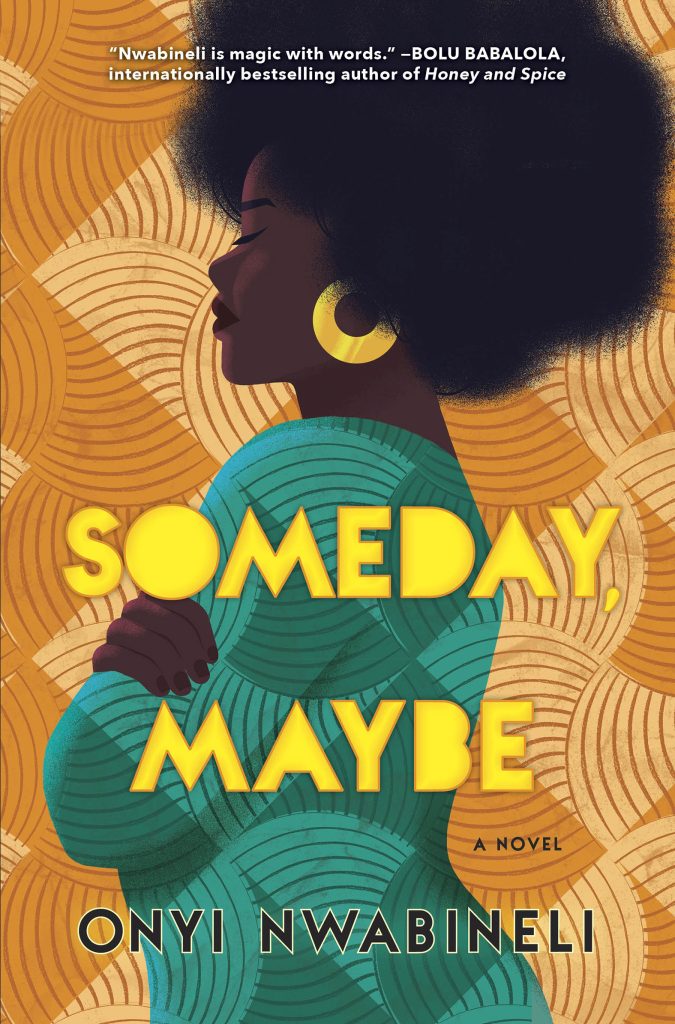 Eve Ezenwa-Morrow had been angry at her husband, Quentin. She’d sent him a flurry of “where are you?” messages that escalated until she actually went to his photography studio to give him a piece of her mind – and she found him lying in a pool of blood, dead.

This, clearly, was wrong. Young husbands are not supposed to kill themselves. They do not leave their wives to figure it out, to wonder why, to get on with life, to deal with his mother who blames the wife. Who always blamed the wife for everything.

Thank heaven Eve’s parents were medical people; they gave her sedatives and watched over her. Thank heaven her sister, Gloria, was a lawyer who looked out for her as Eve lay in bed, unable to do anything but sleep and cry. Thank heaven her younger brother, Nate, didn’t leave her alone – although alone was what she really wanted.

Alone from her persistent Nigerian family, alone from her loony bosses at work, from her best friend, and especially, she wanted Aspen to stop calling.

Eve had nothing to say to her husband’s mother; Aspen would never have listened anyway. She was more focused on driving a wedge between Eve and Q that never quite stuck.
Why didn’t Eve see that Q was unhappy if, indeed, that was why he committed suicide?

Why didn’t he say something, send her an email, try to talk it out with her, something? He didn’t even leave her a note. No, instead, he left her something else that she wasn’t really even sure she wanted…

If “Someday, Maybe” were alive, you would be compelled to pick it up, hold it to your shoulder, and pat it until it hiccuped raggedy breaths. You’d murmur comforting things.

This book hurts in a way that’s familiar to anyone who’s tragically lost someone close.
That bawling-til-you-can’t-breathe feeling is front-and-center inside this book; in fact, it’s large and overwhelming and it’s almost a character in itself. And yet, author Onyi Nwabineli portrays grief so well that there’s humor inside this tale, in those moments of completely inappropriate laughter that happen sometimes, making outsiders think the bereaved has lost her mind. These up-and-down emotions – humor that’s not out-of-place, howling pain, and hope – are wrapped inside a family drama that you oughtn’t even try to resist.

Readers shouldn’t expect soggy tears forever but if you’re fresh to grief, this book may be too much to bear right now. If you’re good, though, you’ll find that “Someday, Maybe” is, too. Will you love it?