NDG Bookshelf: Astride a Pink Horse

When it comes to friends, there’s always room for one more.

The ones you’ve had the longest are the ones that are best: whether you’ve been apart for five minutes or five decades, you slip into conversation easily. The ones you make at work are what you need to get you through your day-to-day. And then there are the new friends, so full of potential and promise. 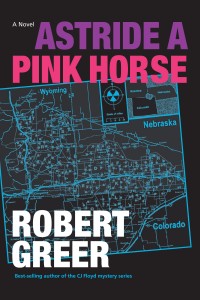 Retired Air Force Master Sergeant Thurmond Giles made many friends over the course of his long career. But in the new book “Astride a Pink Horse” by Robert Greer, some of them were no friends at all.

Once upon a time, the man had surely been tall and handsome, even athletic. But there he was, naked and gray-haired, his cocoa skin dry in the Wyoming desert.

Because the man had been found hanging out near an abandoned nuclear missile site – which was clearly posted “No Trespassing” – Air Force officials were keen to know why he was trespassing. Platte County sheriff Art Bosack wanted to know who’d stabbed the man five times and had mutilated his corpse.

The death of Thurmond Giles was just the kind of news that Freddy Dames thrived on. Dames, former baseball-star-turned-millionaire, owned Denver’s Digital Registry News and prided himself on doing whatever it took to get a story, whether it was 100% right or not. That included sending his best friend and employee Elgin “Cozy” Coseia wherever Dames thought the juiciest lead might be found.

And Cozy was okay with that. Actually, he was better than okay with it when he learned that Major Bernadette Cameron would be spearheading the Air Force’s investigation into Giles’ death.

For his part, the recently deceased Thurmond Giles had led an interesting life.

By all accounts, he’d been a terrible womanizer, which was more-or-less why the Air Force had demoted him and banished him to their version of Siberia before discharging him. Giles, who was a decorated nuclear-missile expert, had then gone to work for a company in Canada that specialized in outdated hospital equipment and he’d left a trail of jilted women and jealous husbands there, too.

Yes, there were a lot of people who had reason to see Giles dead. But was he the only target?

Right in the middle. That’s where I’d place “Astride a Pink Horse.”  It’s a five, dead center, both good-and-bad. It’s okay.

There’s a great mystery here, but the protagonist is implausibly weird. The characters are likeable enough, but not enough to make me want to see them again. Author Robert Greer created a couple of good corpses, but he didn’t give me much of a reason to care why they became so.  There was excitement in this book, but there’s also a stilted, predictable romance that made me roll my eyes.