Thousands turnout for “Our First Stand: Save Health Care” rally in Michigan 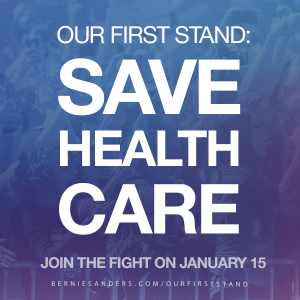 WARREN, Mich. – More than 8,000 people showed up Sunday at an outdoors rally at a community college on a freezing cold day as part of a massive, nationwide show of grassroots support for health care programs under attack by Republicans in Congress. Sens. Bernie Sanders, Charles E. Schumer, Debbie Stabenow and Gary Peters headlined the event, which included representatives from Michigan’s congressional delegation, union leaders and people helped by the Affordable Care Act.

“On behalf of the children of this country, on behalf of the working people of this country, on behalf of middle class families who pay for their parents in nursing homes through Medicaid, what we are are saying to Republicans is if you want to improve the Affordable Care Act, let’s do it together. But if you think you’re simply going to throw millions off of health insurance, you’ve got another thing coming,” Sanders told the crowd outside Macomb County Community College.

“I say to my Republican colleagues: yeah, you’re going to have to worry about Sen. Stabenow and Peters and all of us in the Senate and our friends in the House. But that’s the least of your worries,” Sanders added. “You’re going to have to worry about millions of people who are standing up, who are fighting back and who demand a day when health care will be a right of all people, not just a privilege.”