Don’t stray away from “Wolf Pack” 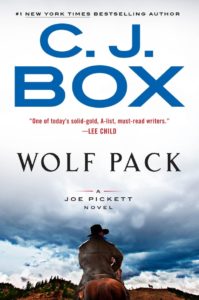 And there you sit, waiting. It’s quiet in the woods, where a snapped twig is as loud as a gunshot out there and as urgent. That snick and your attention is focused, your adrenaline rushed. The question, as posed in “Wolf Pack” by C.J. Box is: which are you, the hunter, or the hunted?

According to Courtney Lockwood at the Forest Service, wolves in Yellowstone Park never strayed beyond the park’s boundaries.

Wyoming Game Warden Joe Pickett knew that was untrue, as did the ranchers in Twelve Sleep County; as if anecdotal evidence wasn’t enough, a black wolf had been caught and contained in a rancher’s horse trailer. It was a magnificent animal, but it was killing the rancher’s heifers.

Like most game wardens, Pickett had a soft spot in his heart for wildlife, the wolf included, just as it bothered Pickett that someone left unchecked traps in his territory. To let any creature needlessly suffer was unimaginable to him; that the trapper left his name and address on the traps was laughable.

But the guy was a “ghost,” which wasn’t funny at all; going by what Pickett could tell, the trapper didn’t exist prior to two years ago. No records, nothing.

The bigger problem, though, was that it was late spring, the elk and deer that survived the winter were fragile, and some idiot with a drone was harassing the animals. Pickett’s colleague in the next county was as peeved about it as Pickett, but the issue was complicated by the fact the harasser appeared to be the father of Pickett’s daughter’s boyfriend.

This wasn’t going to go well at all.

Just outside the county, Pedro Infante knew he was losing control.

Of the four people in the Wolf Pack – three men and Abriella Guzman – Abriella was trouble: beautiful, confident, completely merciless, all good reasons why she wasn’t in charge. Pedro was, but finding their target and assassinating him was taking too much time. Abriella was growing impatient.

The Wolf Pack was getting nervous…

So. How are your fingers?  In good shape, are they?  Great, because you’ll need them for edge-of-your-seat clinging while you’re reading “Wolf Pack.”

But first, readers may be surprised by an opening chapter that’s kind of clunky and a bit on the prurient side. It’s important to the story, so power through it – what’s to come will more than makeup for it, as this tale literally winds up mountains and down through arroyos, between rocks, far above the ground, and between bullets. That this book is a thriller is appealing, but the scenery in the story is just as attractive and author C.J. Box tops it off by bringing into this novel many of his best-loved characters.

Just beware that some of them may not make it out.

If you’re new to this author, prepare yourself for a future search for the rest of the series. For fans of Pickett or Box, though, you know what to do about “Wolf Pack”: hunt it down.

NDG Book Review: Books based on the stories of slave ships

NDG Book Review: ‘Yinka, Where Is Your Huzband? A Novel’