The State of Black Business, Our Impact and Entrepreneurship 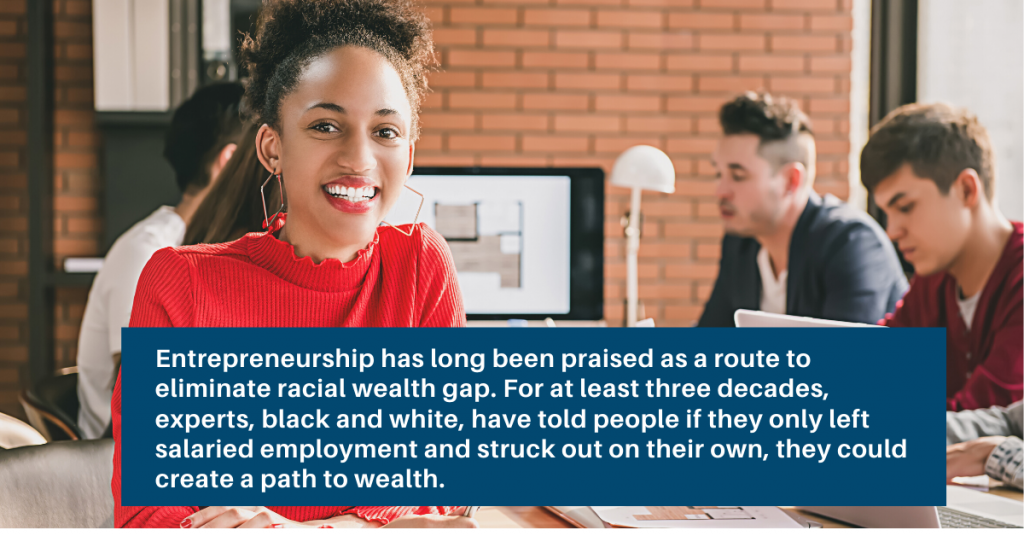 As we celebrate Black History Month this year, we can’t help but reflect on how the topic of racial wealth disparity is as relevant today as it was during Martin Luther King Jr.’s years of activism in the 1960s. And as we come upon state and national elections this year, the topic of wealth disparity and economic justice continues to come up again and again.

The State of Black Business and Our Economic Impact

In his famed 1968 speech “I’ve Been to the Mountaintop” to assert black independence, Dr. Martin Luther King, Jr. called on followers to strengthen black institutions and businesses by moving their money away from the white-run business and banking establishments and depositing their dollars into black-owned institutions. This idea, that buying and banking from black-owned businesses would empower the black community and close the racial wealth gap, has been widely embraced, historically by a diverse array of Americans including Booker T. Washington, Marcus Garvey, Richard Nixon, and recently, by former President Obama.

But what is the state of black business in the United States today and have we made progress broad vs. incremental progress that many so expected? While entrepreneurship and small business ownership for minorities including African Americans have made some progress over the past 60 years, there is still much to be done.

Recent numbers indicate that we have 2.5 million U.S. black-owned businesses, which generate only $150 billion in revenue. This represents negligible ownership and control over the nation’s productive capacity. For instance, in 2017, the top 100 black-owned firms identified by Black Enterprise collectively grossed $27 billion and employed 79,216 workers. While both numbers show growth of our black businesses from previous years, in contrast, Walmart, the top firm by revenue in the U.S., grossed more than twenty times as much in revenue and employed 2.2 million more workers than the entire top 100 black-owned firms.

When blacks do own a business, the return to that business is lower than that of whites and falls well short of closing the racial wealth gap. According to the U.S. Census Bureau’s Survey of Business Owners (SBO), over 90 percent of Latino and black firms do not have even one employee other than the owners, and the proportion of owner-only firms reaches close to 98 percent for African American female-led businesses.

Also, even if blacks had the same business ownership rate as whites, the question of the scale and profitability of the business still would be an issue. 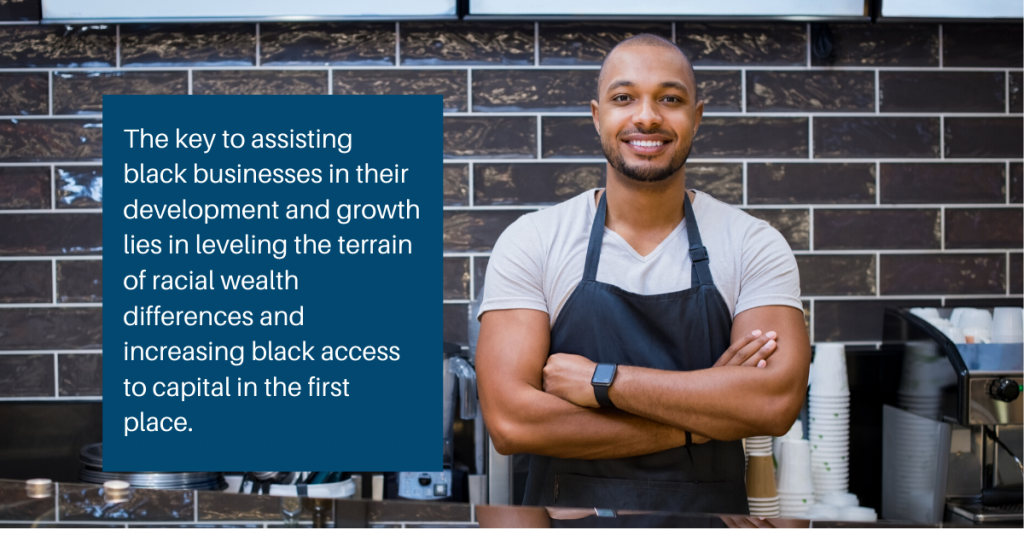 The State of Black Wealth Through Entrepreneurship

Entrepreneurship has long been praised as a route to eliminate the racial wealth gap. For at least three decades, gurus, black and white, have told people if they only left salaried employment and struck out on their own, they could create a path to wealth. This solution has neither been borne out by the evidence on a larger scale over time nor has it proven to be accurate advice under current circumstances.

Here is what we know: The racial wealth gap is large and shows no signs of closing. Recent data from the Survey of Income and Program Participation shows that black households hold less than seven cents on the dollar compared to white households. The white household living near the poverty line typically has about $18,000 in wealth, while black households in similar economic straits typically have a median wealth near zero. This means, in turn, that many black families have a negative net worth.

To combat this wealth issue, robust black entrepreneurship will require an environment where the racial wealth disparity already has been confronted and altered directly. Greater black wealth, and hence financial capital, is the vital prerequisite for black entrepreneurship to assist in the wealth divide. Or better stated: “Having wealth must beget wealth.” A key solution is financial capability coaching and advocating for better income and wage parity.

So, here is this writer’s bottom line: The key to assisting black businesses in their development and growth lies in leveling the terrain of racial wealth differences and increasing black access to capital in the first place. Has progress been made in our quest for business growth in certain industries, yes, regardless of what the data states, the examples like the BE 100 still set the bar on what we can do in regard to economic impact through business and banking and wealth creation?

Are we there yet completely? No, but we are still moving forward as we have done for over 200 years.

Brian K. Marshall is the Director of Entrepreneurship at BCL of Texas and is a certified small business consultant with the Association of Accredited Small Business Consultants.

Straight Talk with Ed Gray The Pandemic of Hate in America continues in 2020 with no signs of mitigation. The words Pandemic and relief are...
Read more
Lead Story

Changes at J.J. Rhoads are Good News for South Dallas

Due to COVID-19 the City of Dallas reportedly has lost more money this year did it during the entire Great Recession ten years ago....
Read more
Latest News