AUSTIN, TX – Kathy Green, an accomplished leader with extensive public policy, nonprofit, and media experience in Texas, has been named the new Manager of Outreach & Advocacy for AARP Texas.

“Kathy has an exceptional demonstrated history of working to better the lives of people in our state, and a skillset fit to further our mission of advocating for and defending the rights of age 50+ Texans,” AARP Texas State Director Tina Tran said. “Her experience working in the public policy arena, championing the rights of the most vulnerable, and spearheading nonprofit programmatic work makes her a perfect match to build upon the impactful legacy of Rob Schneider, who helped lead AARP to some remarkable legislative and advocacy victories.”

Throughout a 25-year comprehensive policy and advocacy career, which began as a legislative and policy analyst under former Comptroller John Sharp, Green has worked in and around the state capitol as a lobbyist for nonprofits, as a legislative director in the House and the Senate and as a policy advisor in the Texas Department of Agriculture.

Green joins AARP from the No Kid Hungry campaign, a national nonprofit devoted to ending childhood hunger, where she served as the Texas state director and oversaw the management, development and implementation of a multi-year strategic plan.

From 2011 to 2018, as the senior director of advocacy and public policy for Central Texas Food Bank, she developed and implemented their advocacy program through a marriage of public policy and hunger awareness efforts.

Green holds a B.A. in Government and English from the University of Texas at Austin and is a member of the Austin Public Library Foundation Board and the Women’s Symphony League. Her involvement in local government also extends to chairing and serving on many council and working groups for both the Austin Independent School District and the City of Austin.

AARP is the nation’s largest nonprofit, nonpartisan organization dedicated to empowering people 50 and older to choose how they live as they age. With a nationwide presence and nearly 38 million members, including nearly 2.3 million members in Texas,

Everybody deserves a second chance. To that end, the DEC@Redbird, Southern Dallas’ hub for entrepreneurial support, will host a Second Start program to help...
Read more
Latest News

By Charlene Crowell As President Joe Biden begins his term of office, the nation and much of the world are waiting and watching to see...
Read more
Latest News

$900 Billion Federal Stimulus: What’s in it, what’s not, what remains

By Charlene Crowell Although a New Year has begun, many American consumers and small businesses continue to feel a financial hangover from the challenges of...
Read more 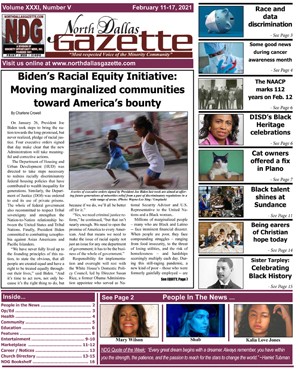