To relax, or not to relax?

Why not? Whatever. Your hair has gone through several stages of change: you’ve braided, straightened, curled, permed, and loc’d, put it beneath a turban, a durag, scarves, wigs, and kangols. It’s been shaved, picked, plucked, pulled back, and done up. There were times when you fought your own hair, and you don’t want your children to go through that. So look for “Glory” by Kahran and Regis Bethencourt, and call the kids.

As photographers, Kahran and Regis Bethencourts say that they consider themselves “cultural storytellers” who believe that Black culture has been “under-celebrated.” For far too long, for instance, Black children were led to believe that their hair and skin was “not long enough, not straight enough… too dark or too light.” As the Bethencourts noticed the somberness in their portraits of children, they recalled personal memories of childhood hair issues and decided that “acceptable black beauty was not our natural beauty…”

They vowed to change the perception. 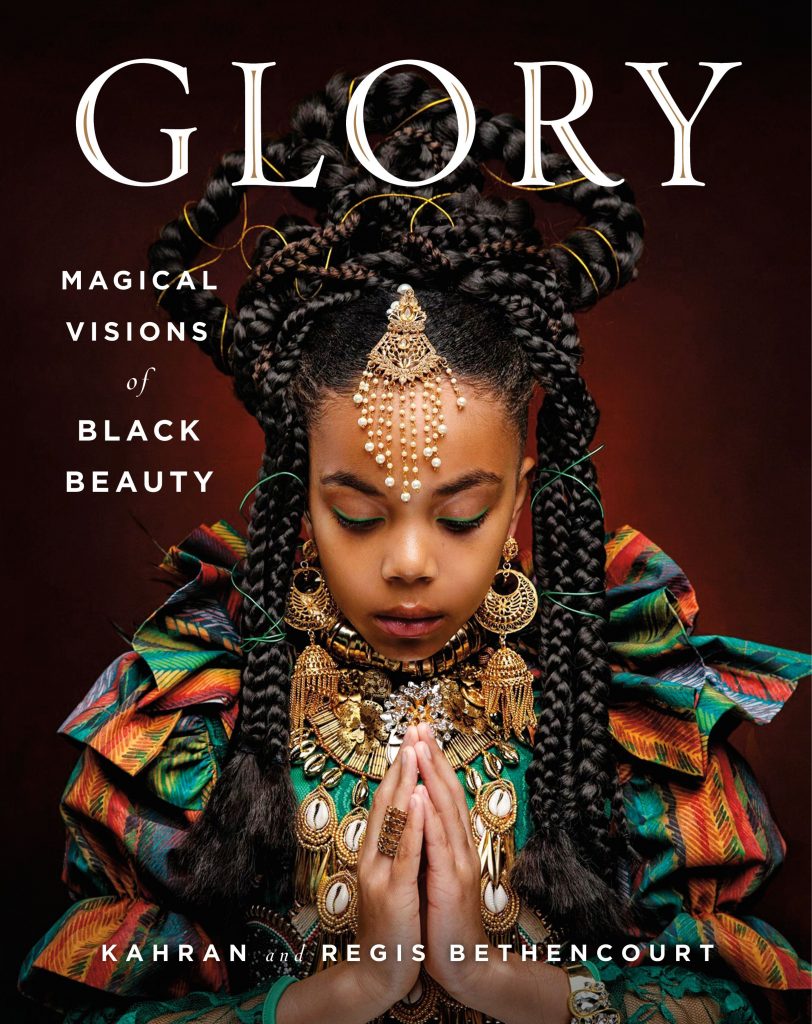 The children in these pages “are a recognition and celebration of the beauty and versatility of black beauty and its innate glory,” they said. The kids were chosen because they were change-makers, because they’ve stood up to adversity, racism, bullying, illness, poverty, loss, or other hardships. Some wear the costumes of Kings and Queens here, while some reflect the dress of their cultures.

Among others, there’s Nia from England, who overcame a skin condition that left her scarred. There’s Kaylee, a singer from Chicago. Nariah from Maryland is a definite foodie. There’s Mbali from South Africa, whose modeling career helped her to overcome shyness. Darryl from Kenya, who wears his dreadlocks with pride, even though they’re frowned upon in his culture. Havana from Germany hopes to be an astronaut someday. Kheris from California founded a clothing company. Bryson in Arkansas is “a kid advocate” for HBCUs. And there’s Ava, a fair-skinned, blonde and blind African American eleven-year-old who learned to “appreciate the way God created me.”

NDG 11/12: Supreme Court scheduled to hear arguments that will determine the fate of the Affordable Care Act

Pick up “Glory” and flip to any random page. You’ll immediately see that the title is apt.
Indeed, much is glorified inside this book, including the no-nonsense strength and do-what-needs-doing attitude of the generation coming up. These kids are pretty incredible, as evidenced by the brief biographies that accompany every portrait. Some will bring you tears, while others are downright empowering.

Speaking of empowering, inspirational quotes are scattered throughout so look for them – that is, if you can take your eyes off the exquisite portraiture from photographers Kahran and Regis Bethencourt. The lighting in each is perfect. The costumes that the children wear are gorgeous. The kids come from everywhere and both boys and girls are elegantly represented in portraits that are nothing but respectful of their essences.

This is the kind of book that anyone of any age can enjoy. Yes, there’s a three-year-old here, so show your toddler. There are youngsters, tweens, teens, and an entire school mentioned, so give this book to your kids. Or just grab “Glory” yourself, and relax.