WASHINGTON — Memorial Day weekend 2021 (May 28-31) will mark the 100-year anniversary of one America’s worst and horrific racial tragedies: The 1921 massacre of Blacks in Tulsa, OK and the destruction of the remarkable Black economy of Black Wall Street by Whites.

Amidst the backdrop of national outrage over police brutality, police killing of unarmed Blacks, and on the heels of the conviction of Derek Chauvin for the brutal murder of George Floyd,  the 100-year anniversary of the Black Wall Street Massacre has taken on new significance for the nation.
Tulsa Burning: The 1921 Race Massacre | HISTORY Channel 100 years following the massacre in Tulsa, Blacks in America are still trying to gain Reparations for a litany of such atrocities, and they are still wrestling with the question of how to stop the bloody brutality that our people are still receiving at the hands of the police departments of America.
On May 28-30, 2021, the National Black Power Convention will take place in Tulsa, OK to commemorate the Black Wall Street Massacre.  National Black leaders and organizations from all over America will be speaking and attending over the three days. 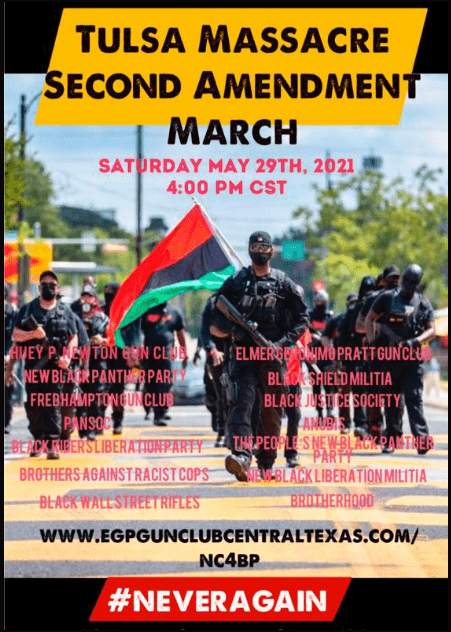 A highlight of the convention will be a huge Second Amendment, armed demonstration to take place on Saturday, May 29th in the Greenwood District of Tulsa, OK; the site of the Black Wall Street Massacre.  Black self-defense groups, and African-American gun clubs from all over America will be gathering by the hundreds (maybe thousands) to demonstrate to the nation the important message of; “Never again will we allow a Black Holocaust to take place!” A national defense program for Blacks is coming into existence.
The National Black Power Convention is being co-sponsored by the Elmer Geronimo Pratt Gun Club (egpgunclubcentraltexas.com); the Huey P. Newton Gun Club (Huey P Newton Gun Club); and the New Black Panther Party (BLACK PANTHER MOVEMENT). The convention is supported by 60 Black organizations throughout the country.

NDG 5/6: DOJ seeks to clean up police departments around the country

DOJ seeks to clean up police departments around the country

According to convention co-host and Second Amendment March co-leader Nick Bezzel (EGPGC): “We have to let the entire world know that the Second Amendment applies to Black Americans; the same as to every other citizen of this country.”
Babu Omowale, leader of the Huey P. Newton Gun Club says “We must honor our ancestors.  The best way to honor the ancestors is being well-trained better prepared than ever to defend ourselves against racist attacks.  We must achieve this for the future of our women and babies.”
The Convention’s keynote speaker is Attorney Malik Z. Shabazz, national president of Black Lawyers for Justice (blackrightsmatter.org) and NBPP Chairman Emeritus. Shabazz is known nationwide as a key figure in litigating police brutality cases as well as a prime figure in the Black movement for over three decades.
Shabazz says: “The 100-year anniversary of the Holocaust of Black Wall Street is a rallying cry to all Blacks that we must fight on every front to protect the legal and human rights of our people and we must unite and organize with a zealous fierceness never witnessed before.”

Reflections on a long, consequential trial