You can’t just sit around.

You can clearly see that people need help, they need someone, and you are in a position to lend a hand. It’s going to take some organizing to do it right, but that’s okay. You can’t do it alone, and that’s okay, too. People need what you have to offer, and so you step in and step up. In the new book “Vigilance” by Andrew K. Diemer, such efforts save lives.
Peter Freedman wasn’t sure whom to trust.

His journey was almost over, but he wasn’t in the clear: after months of toil, he’d finally purchased his freedom, though he wasn’t able to free his wife or children. That would come later; meanwhile, his arrival in Philadelphia was part of the plan. 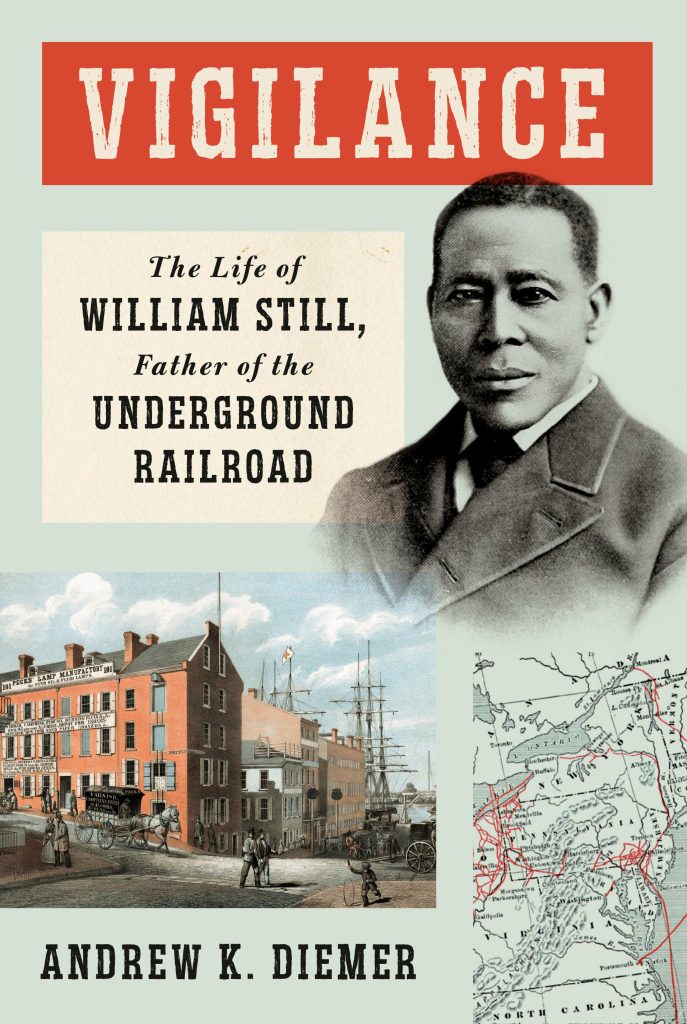 When he was a small boy, he and his brother, Levin, had been sold away from their parents, probably in spite. For more than forty years, Peter promised himself that he’d remember his parents’ faces but there were so many freed people and fugitive slaves in Philadelphia, so many unfamiliar faces, that he scarcely knew where to look.

Imagine his shock when a stranger brought him to the Anti-Slavery Society office, and the clerk there turned out to be William Still, a brother that Peter never knew he had!

Still entered the world in the fall of 1821, the youngest of eighteen children born to a former slave and a fugitive slave, neither of which ever turned away anyone who needed help. As a boy, Still received an incomplete education; later, an employer made sure he learned the basics, which were all he needed to land jobs that would help move people along the Underground Railroad, to freedom and safety.

Still’s steady trustworthiness placed him in positions to make hundreds of contacts on the Railroad, including Harriet Tubman, John Brown, newspapermen, allies, social activists, and others.

His knowledge allowed him to work for freedom long after the Civil War ended, and some months into the twentieth century.

In almost every way, “Vigilance” is a big bite to eat.

It starts out with an astonishing story that captures a reader’s interest fast, a tale that even author Andrew K. Diemer’s subject used as a touchstone throughout his life. Alas, your interest may wane, and pretty quickly: there are dozens and dozens of people to keep track of throughout the pages of the main story here, as well as a clutter of too-detailed locations, somewhat random players, and other small items of seemingly little consequence to the tale.

And yet, readers won’t get entirely lost. Diemer peppers his book with stories of bravery and heart-stopping escape, slaveowners outwitted, and fugitives with the powers of observation and enormous patience. These tales are irresistible, and they give readers reason to stick with a book that can sometimes feel a bit arid.

Should you decide to tackle “Vigilance,” the best advice is to give yourself time. The book fairly demands that you do, lest you be more tempted to just let it sit around.

NDG Book Review: ‘Well of Souls’ is good for the old time instrument