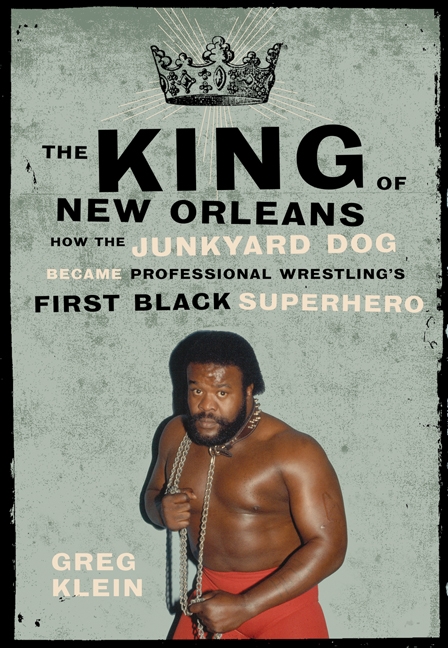 NDG Bookshelf: “The King of New Orleans” by Greg Klein

You were practically pinned to your seat.

They called it a smackdown, but you knew it as pure adrenaline. The good guy with white tights and the bad guy in blue, in the ring together, and you were never more excited about anything in your life – so much so, that they were miles away from your living room and couldn’t possibly hear you, but you screamed encouragement until the match was done and so were you.

Some say pro wrestling is fake, but you don’t care: you love it, but what do you know about it?  Read “The King of New Orleans” by Greg Klein, and you might learn something new…

Born inNorth Carolinain December, 1952, Sylvester Ritter was raised by his grandmother because neither of his parents were around to do it. He was a good kid but not much of a scholar, so he was happy when his school integrated with the white school. Integration meant that Ritter had a better chance at football. In eighth grade, at over six feet tall and 228 pounds, he seemed made for the game.

After high school, Ritter played football at Fayetteville State Universityand later tried out with the Oilers and the Packers, but injuries kept him from a pigskin career. His dreams “dashed,” he joined his hometown sheriff’s department where, during a wrestling tournament, he discovered a talent for takedowns.

Promoter “Cowboy” Bill Watts was looking for a “superstar,” but it couldn’t be just anyone.

Wattswas looking for an African American babyface who could win audiences and matches. Watts knew about Sylvester Ritter, but he thought Ritter needed more experience before he was ready forNew Orleansand “real money.”

Eager to lose his amateur status, Ritter headed forCanadaand threw himself in the ring to learn. By 1979, he was back inNew Orleans– which was good becauseCrescentCityresidents adored Ritter, who was performing as The Junkyard Dog.  They cheered for him, worshipped him, filled arenas for him, and physically assaulted his ringside “enemies” on his behalf. Finally,Wattshad his “superstar” and “JYD” had pockets filled with cash.

So you say you’re not really a wrestling fan? That’s okay. Go read the business section because this book isn’t for you anyhow.

Author Greg Klein writes with a fan’s-eye view of pro wrestling before it became a TV sensation, and that’s going to appeal to anyone who follows the sport. I liked that Klein explains in detail why Sylvester Ritter’s career is noteworthy and why it’s important to remember his contributions.

What I couldn’t appreciate are all the names. There seemed to be hundreds of men involved in the few years about which Klein writes and, even for fans, that’s a lot to keep track of.
Still… if you’re a wrestling fan, how could you pass up a book like this?  Could you live, not knowing this history?  No, you can’t… because, for you, “The King of New Orleans” is a knockout.

‘A Woman Ain’t I – A Depiction of Sojourner Truth’ presented by History At Play, LLC in virtual performance June 20

‘Juneteenth: Faith And Freedom’ ready for viewing now on Youtube