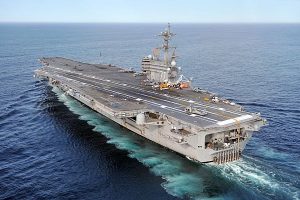 “The excellence and readiness exhibited by the crew of USS George H.W. Bush is a direct reflection of the leadership of Capt. Luther,” said Branch. “His professionalism and dedication to his crew and the Navy comes through in everything he does.”

“I want to thank the officers, chiefs and crew of George H.W. Bush for their outstanding performance,” said Luther. “They are all highly trained and motivated and will always be heroes in my eyes. I was a captain before I came to this ship, I am a captain now and I will be a captain when I leave but the greatest honor of all was being the captain of the George H.W. Bush. Capt. Loiselle, I know they will make you proud.”

“Capt. Loiselle takes command with a proven track record of success, I am confident in his ability continue this ships winning tradition,” said Branch.

A native of Cranston, R.I., Loiselle graduated from Assumption College in 1988 with a degree in Mathematics. He previously served as executive officer aboard USS Theodore Roosevelt (CVN 71) and most recently as commanding officer of USS Gunston Hall (LSD 44).

“I hope to carry on the great tradition already established on this ship,” said Loiselle. “I have already seen the supreme work ethic and attitude that will carry us to greater heights when we head out on deployment and operate in service to this nation.”