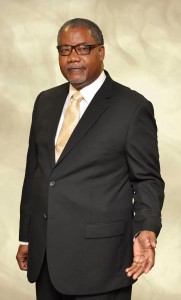 The anticipated 30,000 delegates attending the annual event will have the opportunity to participate in the over 200 Christian education classes offered. The classes are designed to help develop and equip NBC state/local leaders with information and teaching techniques they can take back to their respective ministries.

This year’s session also marks an election year as the delegates will be electing a new president at the 134th Annual Session of the National Baptist Convention, USA held in New Orleans, Louisiana from September 1-5. Current president, Dr. Julius Scruggs will not be seeking re-election at the end of his five year term. The maximum term for the office of president is two consecutive five year terms, according to the NBC website.

Dr. Randy G. Vaughn of Port Arthur is one of the six candidates vying for the presidency of the oldest and largest African-American Christian organizations in the United States.

North Dallas Gazette spoke with Dr. Vaughn via video conference to discuss his vision, experience, and passion for wanting to serve in ministry.

Revive, Equip and Empower is the course of action Vaughn hopes to execute if elected as President of NBC and he strongly believes this course of action can be accomplished through his team-oriented leadership style which fosters an environment inclusive of diverse ideas and creativity.

“Our Convention is 134 years old and our progression has been in the lines of a church. Mentality-wise we have developed into a mega-church and the only problem with that is there are other mega-churches that compete with this mega-church {NBC}. What I propose in terms of revising and so forth is we have come to a point in time whereby we need better and stronger organization with practical principles in how we practice being the organization,” comments Vaughn on strategies he would take to accomplish his vision.

Vaughn’s extensive leadership background is one of the essential reasons he feels he is ready to assert the role of president. He has served for the past 30 years as Senior Pastor of Mount Sinai Baptist Church in Port Arthur and per Vaughn his church is one of the larger African-American churches in the area.

His leadership credentials includes not only pastoring, but establishing and serving as President for the non-profit organization, Succour in which it provides humanitarian and spiritual assistance to residents of Haiti; serves as Senior Fellow for the Departments of Homeland Security and Criminal Justice (North Carolina Central University, Durham); National Liaison for Homeland Security (National Baptist Foundation); and National Security Advisory (Faith Base Advisory Committee).

Vaughn has also served in several leadership positions within the NBC where he served as Regional Vice President in addition to acting as president for the Texas State Missionary Baptist Convention, Inc.

‘Come walk with me,’ Vaughn explains has been the guiding principle of his life as he shared with NDG that at the age of 27 he was challenged to walk with God by faith.

“My wife and I left corporate careers out in California by faith with no promise–nothing but God’s promise that he {God} would be with us as we walked with him. We watched God open doors for us, provide for us to bring us in situations whereby we would learn of him better, adds Vaughn.

His 34 years serving in the ministry he summarizes has been a faith walk and he has no regrets on the journey he feels God has taken him.

“I don’t survive because of my monetary income as much as it is because of my faith and to learn that great lesson in life, it has set me on course,” he adds.

Vaughn certainly feels his life course has helped in preparing him to take on the leadership role for the National Baptist Convention, USA. In addition to his faith he attributes his mentors which some of them include former NBC president, Dr. William J. Shaw (1999-2009) and his late parents LeRoy and Elsie Hickerson Vaughn.

Vaughn also credits his success due in part to his 41 year marriage to his wife, Brenda and shared he married his best friend who is his greatest supporter.

Global mission is one area of importance to Dr. Vaughn as he has traveled extensively abroad serving in countries like Haiti, India, and Switzerland.

“We need to be the voice of the least of these and give back not by way of our gifts, but by our influence,” states Vaughn.

As president, Vaughn would like to expand the global efforts to other countries as well as broaden the missionary services NBC currently offers via its Foreign and Home Mission Boards (i.e. food/clothing, shelter)

“I think we can make a greater impact, I think that our missiology approach needs to be challenged and changed that we not only be concerned about what I call biscuit, blankets and band-aids that we have got to really began to sense the burden of people and sometimes its governments that blocks the biscuits, blankets and band-aids.

How can an institution the size of National Baptist not use its influence to help free people from some of those burdens, so we got to go beyond the mentality of mission that simply feeds poor and clothed naked. We got to go beyond that to places whereby we began to affect change of lives as it relates to government policies…,” explains Vaughn.

Other high priority issues Vaughn would address if given the opportunity to lead the NBC include: establishing a new Board of Directors to ensure a proper checks and balance of power as well leadership accountability; Budgetary issues with respect to implementing cost-effective solutions that equate to improved financial stewardship; and better national use of technology in a post-digital culture.

“It’s not our traditions, but our traditionalism that has caused us our major problems …”explains Vaughn regarding NBC’s present-day issues.

He believes being a “resident president” to ensure respectable leadership in office as well as delegate more responsibility to the Board of Directors, which he feels will give them a greater sense of ownership in protecting the mission of the NBC.

“The field is open, it’s left to our creativity, our commitment and dedication to really follow through to do all and be all that God has called for us to be,” advises Vaughn.

For more information about Dr. Randy Vaughn’s vision and leadership experience, got to: http://randyvaughn4nbcusainc.com/ and to see his campaign video you may visit: http://www.youtube.com/watch?v=utuOWxQy2Zc&feature=youtu.be&utm_source=Dr.+Randy+G+Vaughn+++%22The+Candidate%22+Video+Press+Release&utm_campaign=Dr.+Randy+G.+Vaughn++The+Candidate&utm_medium=email.