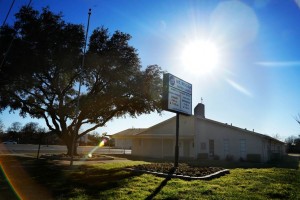 Dallas – The oldest African American Church in Dallas County is celebrating 150 years of transforming lives.  Mt. Pisgah Missionary Baptist Church, affectionately known as “The Rock”, has been serving the Community since the Pre-Civil War Era.  It has a very interesting history and an even brighter future. To commemorate this sesquicentennial landmark, a series of activities designed to embrace and engage the community will begin in June, including the debut of the Church’s first-ever CD project, “Worship On The Rock”, which is set for release during a free concert 7 p.m. June 20, 2014 at Westside Baptist Church, 900 Bellaire Blvd. Lewisville, TX 75067.
According to the Church Historian, on the 3rd Sunday in June of 1864, a few black missionaries and a White minister by the name of Rev. Butler met under a large elm tree in the White Rock area of Dallas to discuss the formation of a Church, which is now home to nearly 2000 weekly worshippers.
“The rest is history”, said Robert W. Townsend, Senior Pastor.  “While we are proud of our past, we are even more excited about our future.  I am especially excited about the release of our Commemorative Worship CD Recording which embodies much of who we are  – a worshipping Church,” he said.
“Worship and Word is the pillar of Mt. Pisgah so marking this historic milestone with a CD project is fitting,” said Linda Mitchell, Minister of Music.
“Worship At The Rock” was recorded live and takes the music lover on a journey of a mixture of praise & worship, an anthem, traditional and contemporary gospel music. While the CD features national recording artists, Gaye Arbuckle and Chester D.T. Baldwin, what makes it even more special is the children’s choir (The Joy Spreaders)who are featured.
“The music is filled with messages of hope, confirmation and inspiration and having all generations represented and the variety of music, was very important to us,” explained Mitchell.  “We wanted music that Church choirs from all across the Country could sing on Sunday mornings, said Mitchell.”
Additional activities that will take place in June include:
Mt. Pisgah has been serving the North Dallas Community for 150 years.  Their motto, Sharing Christ as Savior submitting to Christ as Lord, is reflective in the countless ministries they do to transform lives.