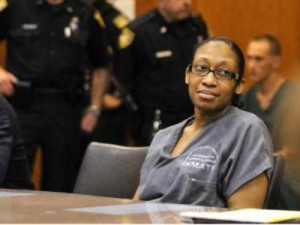 Hundreds of regional and national activists will come together in Jacksonville, Florida from Friday, July 25 through Friday, August 1 to support embattled domestic violence survivor Marissa Alexander, build awareness about domestic violence and reproductive justice, and strengthen opposition to mandatory minimum sentencing. “STANDING OUR GROUND Against Reproductive Oppression, Gender Violence, and Mass Incarceration” is envisioned by organizers as a celebration, an exercise of civil rights, and a call for human dignity.

The date marks the one year anniversary of the verdict exonerating George Zimmerman for the murder of Trayvon Martin and connects to the August 1 hearing where Alexander will argue for Stand Your Ground protection. Participants are linking the call to free Marissa Alexander with Florida-based movements for justice for Trayvon Martin, Jordan Davis and others.
The week will feature noted speakers, educational panels, workshops, cultural events, and community outreach. An opening ceremony will launch the activities on Friday, July 25. On Friday and Saturday, the national SisterSong Reproductive Justice Institute will hold panels and training workshops. Saturday will also feature a Youth Assembly. Sunday is highlighted by a benefit concert for the Marissa Alexander Legal Defense Fund.

On Monday, there will be a march from the SisterSong conference to the Duval County Courthouse. Tuesday will feature a keynote discussion by University of Illinois Professor Beth Richie, author of Arrested Justice: Black Women, Violence and America’s Prison Nation, followed by a panel of local and national feminists and leaders in the movement for women’s safety.

Wednesday will take on the issues of police brutality and wrongful imprisonment with a panel of speakers organizing on these issues. On Thursday, legal experts will conduct community training to inform people about their rights under the law. The day will end with a candlelight vigil. Throughout the week, activists will also take part in a People’s Investigation where they will bring their concerns and questions to organizations and institutions of power on the local, state and national level. Times and locations are being finalized.

On Friday, August 1, participants will attend a hearing on whether Marissa Alexander can argue for immunity from prosecution under Florida’s Stand Your Ground law.

In 2010, Alexander fired a warning shot to stop a life-threatening attack by her estranged husband. She caused no injuries, but  was found guilty of aggravated assault and served 33 months of  a mandatory 20-year sentence before a Florida appeals court overturned the guilty verdict. State Prosecutor Angela Corey has chosen to re-prosecute Alexander, this time threatening a mandatory 60-year sentence if Alexander is found guilty in the new trial currently scheduled to begin December 8.

National supporters of Marissa Alexander in other cities will also take action during the week to build awareness about ending domestic violence and mass incarceration, and supporting all women’s right to self-defense. Participants will take part through daily live-streaming of Jacksonville events and through Facebook and Twitter updates, and a Selfies for Self-Defense campaign.

The PhD Project is bringing diversity, equity and inclusion to university campuses

Bearers of Christian Hope: Connecting Others to A Better Life