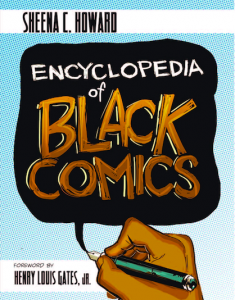 Oh, how you loved to do that. It started with spider-legged people and crooked houses. As you got better, you replicated and created worlds, invented characters, and expanded your tool use. Even today, with sharp pencil or fine pen, you can still make a respectable doodle; in the new book “Encyclopedia of Black Comics” by Sheena C. Howard, you’ll see how you’re right in ‘toon.

One-hundred-four years ago, the country was captivated by a cat and a mouse.

The cat was appropriately called “Kat,” and he lived with the Dingbat family in the comic strip, Krazy Kat. His nemesis was Ignatz, and in each episode, Ignatz the mouse threw a brick at Krazy Kat. It was an “incredibly simple” strip but it became “one of the most respected and influential works in comics history…”

The artist was a black man named George Herriman who was the first major cartoonist of color. He would be far from the last.

Today, countless Black cartoonists, inkers, illustrators, and writers toil behind-the-scenes to create comic strips and comic books, as well as TV shows and movies. In this book, Howard celebrates the firsts, the bests, the note-worthies, and the historic.

In the early days, for example, many comic writers worked through the Black Press; that included Jackie Ormes, “the first published female African American cartoonist.” Ormes was the creator of Torchy Brown, a strong Black cartoon woman; and fashionista Ginger, whose little sister, Patti-Jo offered wisecracks. In 1947, one of Ormes’ characters was made into an “upscale” doll; in 2014, Ormes was posthumously indicted into the National Association of Black Journalists’ Hall of Fame.

The first African American cartoonist with “two nationally syndicated comic strips” is in this book. Political and social-commentary cartoonists are represented. The first Black woman to own a comic book store is profiled here, as is America’s first Black comic book publisher; the “first and only Black editor at King Features Syndicate;” an animator and writer whose credits include Thundercats; a twelve-time Pulitzer Prize nominee; and many people who use their talents to enhance your favorite superhero comic books…

In his afterword, comics writer-editor Christopher Priest points out that, to many African Americans, the Man of Steel isn’t Superman, he’s “SuperWhiteMan.” That’s just one reason, as Priest indicates, that a book like this is needed.

The other reasons fill up these pages with a wide range of biographies, achievements, and examples of many cartoonists’ work, in bite-sized articles that make quick reading. While there’s a chance that you’ve heard of many of the people included in this book, author Sheena C. Howard didn’t just keep things familiar: she dug back into history for several of her profiles, and she also includes people who are on the periphery of – but important to – today’s comic book world.

Quick-minded readers may note some absences inside here, but “Encyclopedia of Black Comics” is a good start for this genre. For those who love the funnies, cartoons, or pen-and-ink art, this book will be a big draw.