Fire and Fury depicts a White House in chaos 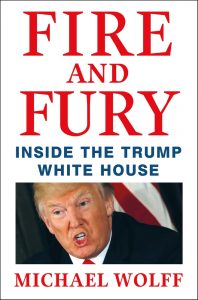 Most likely, you had an opinion about a year ago, when Donald Trump was sworn in as our 45th President. Was he “Presidential,” or was he untested? Chances are, this entire time, you’ve never wavered in judgment. And then, along comes Fire and Fury by Michael Wolff.

Either with glee, or the fury in its title, the oft-asked first question is: “Is it true?”Early in his book, Wolff says that he did “more than two hundred interviews…” Publicly, he’s said that he has tapes. The White House admits that he had access to the Executive Mansion and journalists have corroborated his presence, so it must be assumed that Wolff was there with ears open, although quotes and points made here are not always attributed to testable sources. And so, though it reads like a novel, this book is at least somewhat verifiable.

That aside, Wolff begins with something that has often been said: many people simply assumed that Trump wouldn’t win; in fact, his “tiny band of campaign warriors… were not ready to win.” Even so, Trump supposedly perceived a loss as a win: he believed it would help increase his presence and his brand. Wolff gives readers reason to question if the win, indeed, helped the Trump brand.

Following the inauguration, trouble happened almost immediately when Trump began focusing on things that seemed unimportant, the size of inaugural crowds, and inaugural weather. Wolff says that the White House staff quickly learned that Mr. Trump needed flattery and aggrandizing on a constant basis, and their thoughts on “handling” him are not complimentary. Wolff reiterates those comments, and the alarm expressed by foreign diplomats over the Trump presidency; he also has some less-than-desirable things to say himself about Mr. Trump and his children – and yet, Wolff says that Trump can reportedly be a likeable guy.

Of course, Steve Bannon plays a large part in this account, and Wolff indicates that Bannon and other Trump staffers (including Trump’s family) conflicted constantly. Since this books’ release last Friday, readers may note that Bannon has stepped back on the things he’s supposedly said – but stepping back is not denial and it came after a lengthy pause.

Much like the Trump presidency, the fact is that this book will be argued along supporter lines and it’s not going to change any minds. Then there’s this to think about: yes, entire conversations are recreated here, conversations that Wolff may’ve gotten second-hand, which inherently makes this book fiction to a point. But if what Wolff has written is even ten percent accurate, is that too much?

Overall, there’s not much inside this book that you haven’t already seen online, on social media, or in your newspaper. You’ve absorbed it already, in essence – so should you still read Fire and Fury?

My call: absolutely. This book seems as though it may be the cultural touchstone of the year and it may impact politics through at least 2020. Whether you are pro-Trump or pro-Twenty-Fifth amendment – today, this book fits.