Congressman John Lewis is known and revered worldwide for his social justice activism as a young man during the modern Civil Rights movement which sparked large scale civic and social change in America. Many have seen the horrible 1965 footage and photos of Lewis being clubbed in the head while attempting to march from Selma, AL to Montgomery, AL arriving at the Edmund Pettus Bridge to 150 police officers waiting to deliver violence and intimidation to the protesters marching for voting rights for Black Americans. 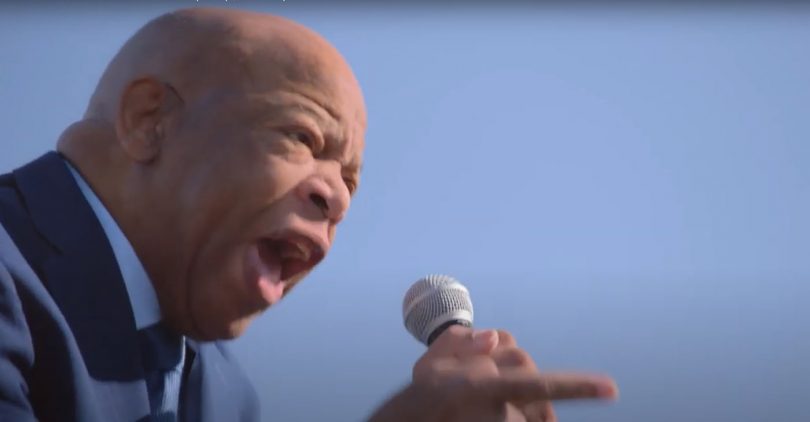 Then Alabama Governor George Wallace had outlawed protests and marchers, who were raising awareness about the plight of Black Americans, who had been made to pay poll taxes, take literacy tests or flatly denied their right to vote by intimidation and the threat of violence at the ballot box. At that particular time, Black Americans made up 57 percent of the population of Dallas County, which is where Selma is located, yet and still only 2 percent of Black Americans were registered to vote.

On what would be called Bloody Sunday, Lewis, who at the time was Chairman of the Student Nonviolent Coordinating Committee (SNCC) along with other civil rights lions like Reverend Hosea Williams (SCLC) continued on their march despite then Governor Wallace’s threats and were attacked by the police, sending 58 people to the hospital.

Lewis, who suffered a skull fracture during the attack, left the hospital the following week to testify before Congress about what had happened to the protesters, resulting in the passage of the Voting Rights Act by Congress which was signed into law by President Lyndon B. Johnson, giving Black Americans the right to vote and offering protections (National Guard) to marchers in pursuit of justice at the ballot box.

In Good Trouble, award-winning documentary filmmaker Dawn Porter (Gideon’s Army, Trapped, Spies of Mississippi) captures the many sides of John Lewis which are all connected to his quest for freedom. Porter shows his early desire to become a preacher eventually leading to a career in social justice and politics.

In the documentary, we see a young John Lewis from Troy, AL who aspires to be a preacher to such an extent, he preaches to chickens. His desires shift when at 15-years-old, the actions of Rosa Parks and Dr. Martin Luther King change his path, leading the civil rights lion to “Good trouble; necessary trouble to save our country, to save our democracy,” he says.

Lewis, who has been arrested 40 times, five of those times since being a member of Congress, allows viewers into the world beyond politics. Viewers learn how he met and fell in love with his wife, Lillian Miles Lewis, who died in 2012 and that he is still as heartbroken over the loss today as he was the day she passed.

Viewers see the fun side of Lewis, who loves to dance and crack jokes with his mentees and staff. John Lewis lights up any room her enters. Lewis is a man revered for his commitment to Civil Rights and viewers learn that all aspects of his life are tied to that pursuit. Lewis’ values as a human being are always at the forefront of every decision he makes in his personal and professional life.

Lewis’ major value is freedom. “When you lose all sense of fear, you’re free,” offers the activist who literally continues to traverse the country in pursuit of justice. Lewis, 80, who is battling pancreatic cancer stomps for Beto O’Rourke and Stacey Abrams during their high-profile bids for political change.

Described repeatedly as courageous, Lewis’ energy now is not very different from the energy on full display in the footage of the marches and Freedom Rides. Lewis lives and breathes the pursuit of freedom and all around him know it. To be in his orbit, one must hold that value if you are to be a part of his universe.

Underscored by a soulful and haunting soundtrack, the documentary also shows the difficult times and sacrifices that sometimes have to be made while in pursuit of justice for all, like Lewis’ damaged friendship with the late civil rights icon and politician Julian Bond. Their 1986 battle over a Congressional seat led to Lewis’ harsh words about one of his closest friends – painful words that Lewis could not take back.

Lewis won the seat and is now in his 17th term as a Congressperson but at what cost? Many of the people in the civil rights movement are passing on and Porter’s documentary begs the question of who will replace these pillars of democracy who are willing to sacrifice so much of themselves for a far greater cause?

Lewis lights up the room wherever he goes. Like Moses, seas of people part to make a clear path for Lewis, who strides to the podium with personal stories and political messages that people need to hear. Lewis clearly understands there are more years behind him than in front of him. He is pained by the strategic and dubious attempts by Congress and the Supreme Court to undo the work of he and his ilk in a supposedly post-racial society.
Good Trouble debuted Friday, July 3, 2020 OnDemand on multiple digital platforms.

People in the News

The staff of the North Dallas Gazette got some welcome news this week. By special proclaimation issued by Dallas Mayor Eric Johnson, the City...
Read more
Politics