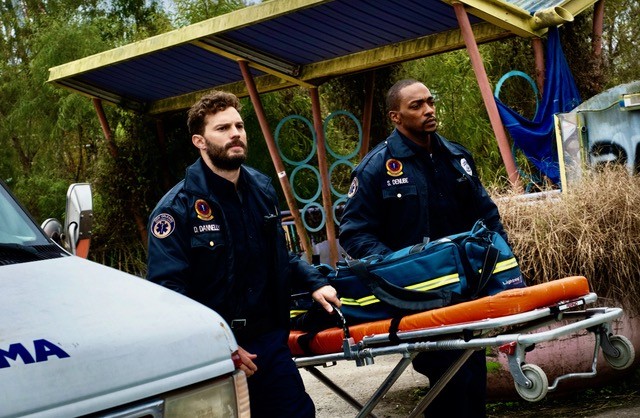 Should partygoers put down their Molly and try a tab of Synchronic? This cautionary sci-fi/fantasy/thriller suggests not.

Synchronic is a drug that hurls its users back in time. Time travel with a seven-minute limit. That’s the concept created by co-directors Justin Benson and Aaron Moorhead, one that forms a storyline and characters that are further developed in Benson’s ho-hum screenplay. Evidently, fulfilling the potential of this premise, on a small budget, turns out to be a task beyond the filmmakers means. It’s particularly noticeable because the recently-released Tenet, which treads the same turf, blows it out of the water.

Steve (Anthony Mackie) and Dennis (Jamie Dornan, 50 Shades of Gray) are buddies first and co-workers second. They’re EMT paramedics, riding around New Orleans in an ambulance and saving people’s lives. Something new is happening. The guys are encountering twentysomethings high as kites, mangled bodies at the bottom of elevator shafts, burned corpses and other bleak oddities. 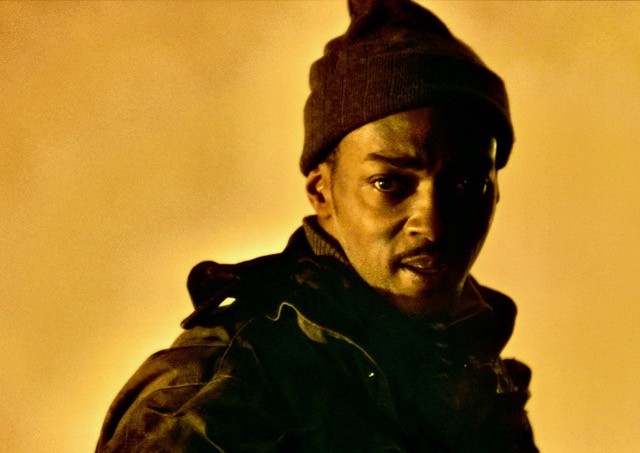 Word on the street is that kids are taking a new designer drug, Synchronic. It’s either a hallucinogen that makes you think you can go back in time or a magical pill that actually does the deed. Steve has a unique interest in the drug and downs a pill. Then Dennis’ teen daughter Brianna (Ally Ioannides, TV’s Parenthood) goes missing. The last time anyone saw her she was high on the stuff. Steve tries to find her, and his experiment with the drug starts him on that journey.

Initial scenes are a huge disappointment. Sets, both indoors and outdoors, look exceedingly tacky and cheap (production designer Ariel Vida, The Endless). It looks like the film was shot on Scotch tape (cinematographer Aaron Moorhead, The Endless) and on a back lot. Sequences fit together decently (editors: Benson, Moorhead and Michael Felker), however what’s on view is never exciting, riveting, OMG supernatural or a technological wonder. It’s as if the film’s special effects were done in a high school physics lab or on an iPhone—a first generation one, not the new 12. 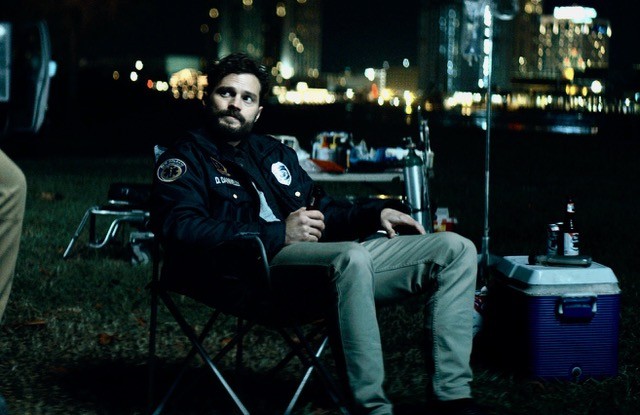 The basic story could take audiences places—physically, spiritually, emotionally—where they’ve never been. But it doesn’t. If it weren’t for the plot device involving Steve looking for Brianna until he gets a definitive answer, there would be no forward momentum. No reason to stick around. The friendship between the two men is more interesting than the main event. Mackie and Dornan create a convincing brotherhood, not a shallow alliance. It feels like Steve genuinely loves his friend’s daughter and that Dennis is completely concerned about his buddy’s welfare. It’s a nice bromance, but it can’t carry an entire movie.

The drug itself does have some allure. Drop it and it affects the pineal gland, a small endocrine gland in the center of the brain, sometimes referred to as the “third eye,” due to its sensitivity to light. The gland receives data from the environment regarding the light outside, affecting the flow of melatonin, which modulates sleep patterns. This biological part of the setup is kind of fascinating. Though audiences aren’t looking for a science lesson, exploring the data behind the drug might have added some depth to a very thin script.

So, with this fairly fanciful notion, how crazy and weird do the filmmakers get? Do they play with your head? Show mindboggling illusions? Invent uncanny creatures? Choreograph incredible blood-rushing action scenes? No. Are there cheesy, gory, bloody horror elements, the kind that make sci-fi/horror fans squeal with revulsion and delight? No. If Justin Benson and Aaron Moorhead couldn’t throw down with the best sci-fi, fantasy directors in the genre, why did they bother? That’s a question audiences will ponder as they leave the theater before the lights come up or flip to another streaming service before the end credits begin.

Mackie is respectable in a mediocre movie. He’s been more compelling (The Hurt Locker), magnetic (Captain America: Civil War) and edgy (The Hate U Give) in other films. Jamie Dornan may never escape the smarmy shadow of the 50 Shades… franchise. Ioannides has a nice air about her as Brianna. Katie Aselton as Tara, her mom and Dennis’s wife, gives a very natural performance and her chemistry with Dornan seems genuine. Dennis pines: “Brianna was the one thing that kept us together. Now she’s gone.” 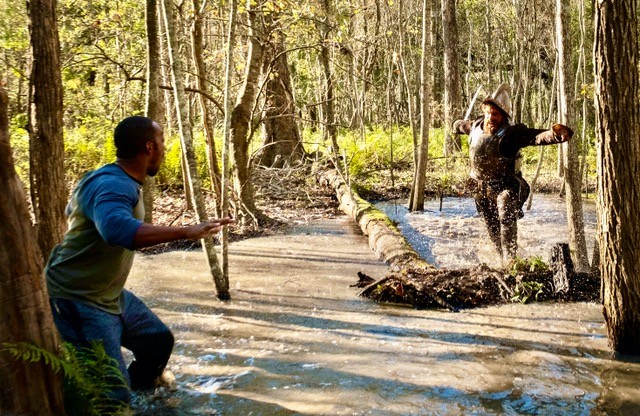 If Justin Benson and Aaron Moorhead were given bigger budgets and a top-notch tech crew could they make a movie as spellbinding as Tenet? Certainly, their ability to establish personal, intimate feelings between characters is an asset that might serve them well on a bigger project. What should be their next steps will likely be up for debate by agents, producers and film companies after their movie’s release.

The other debate? “Should partygoers put down their Molly and try Synchronic?”

High on the Hog: How African American cuisine transformed America

Why St. Lucia might be a Black traveler’s paradise