NDG Book Review: ‘Beyond the Sand and Sea’ is a thrilling read

The brochures have been sitting on your counter for months.
Once, everything was planned: flight times, luggage restrictions, hotel reservations, tickets to the places you wanted to see. The pandemic put a halt to all that but you know you’ll take the trip eventually. Maybe this year, maybe in five years. As in the new book “Beyond the Sand and Sea” by Ty McCormick, the journey is worth the wait.
Born in Dadaab, a refugee camp in northeast Kenya, to parents who’d fled the Somali civil war before his birth, Asad Hussein grew up in a makeshift shack that flooded every rainy season. With no ID, no birth certificate, and no way to legally get either from Kenya or Somalia, he was a person in-between.
McCormick met Asad “a day or two after Trump announced his travel ban.” He was an editor for an American magazine then, assigned to cover Africa when he read an article in New York Times Magazine that was written “by a young man who had grown up in Dadaab.” It never occurred to McCormick that the writer was “still… stranded in the camp.”
Stranded physically, but not in his mind.
Ever since he was small, Asad had dreamed of getting a good education. As a child, he’d eagerly taken advantage of whatever formal schooling was offered at Dadaab. He devoured all printed material he could find and he seized every opportunity he could get to learn, becoming largely self-taught. Still, though Asad experienced a discouraging avalanche of educational setbacks in his lifetime, his tenacity attracted supporters and McCormick soon became one of them. 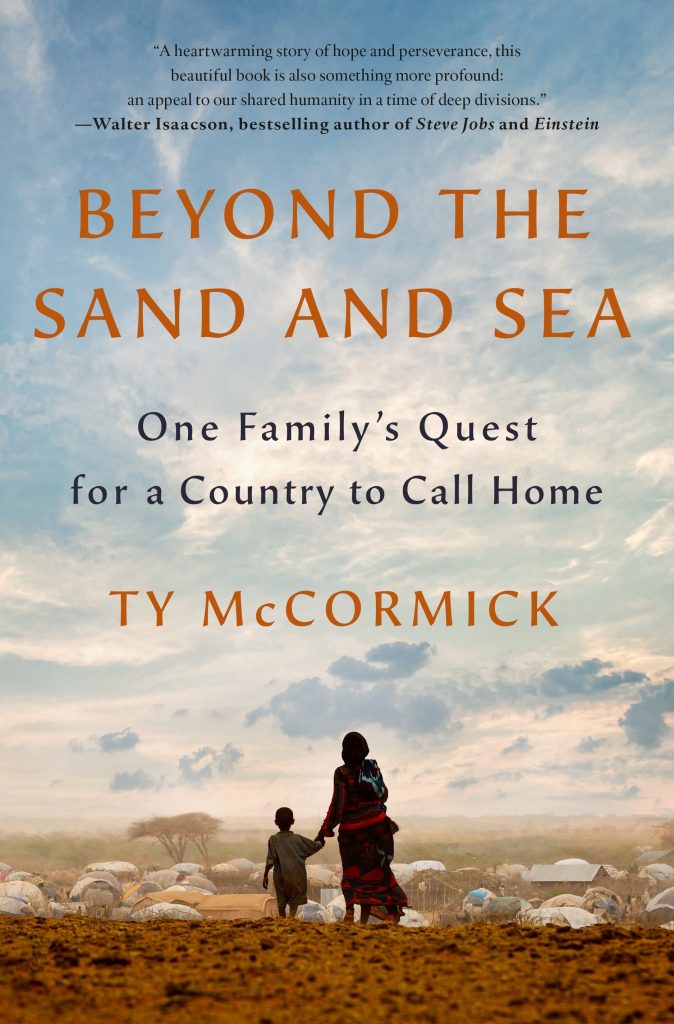 It hadn’t been easy, but it had finally appeared that a near-miracle was in sight and Asad’s dream might be possible in America. With no personal paperwork and no country as anchor, would the travel ban – “an executive order… that changed everything” – put a stop to the journey?
Open the newspaper, click on the news, and you’ll probably hear about immigration in pretty short order these days. You have opinions. Now read “Beyond the Sand and Sea.”
Step in, and that sand isn’t pleasant: author Ty McCormick writes of its relentlessness, the heat, the squalor of camp and danger of war, a destructive rainy season.

Or might sand be a metaphor for grit? Surely, that could be true for the laser-focused Asad, and more so with Asad’s tougher-than-steel sister, Maryan, a woman who threw aside cultural laws to save her family. She’s a big presence in this story, and you’ll wish it was bigger.

Alas, the sea is choppy and so is the last half of this book. Not to be a spoiler, but it’s a whirlwind of Asad’s more recent past and his future and despite that it’s inspirational, it’s also uneven. Pay attention to the time-frame on chapter headings; that helps.

The inspiration, though: don’t miss it. Don’t pass up a chance to be thrilled. If you need a book that’ll make you stand up and cheer, “Beyond the Sand and Sea” is just the ticket.

Previous article
Comcast commits to investing $1 billion to reach 50 million low-income Americans with tools and resources to succeed in digital world
Next article
Reflections on a long, consequential trial