Eugene H. Tinner, who completed his duties in the Army CC Camp in 1941, went into the United States Army in 1943 and received his honorable discharge in 1948. Recently Tinner felt grateful and blessed of God when he recently received an official autographed picture and a congratulations card from President Barack and Mrs. Michelle Obama for his years of service in the Army and his birthday. 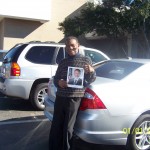 Tinner served in the Philippines and in Tokyo, the capital city of Japan, located on Tokyo Bay on the eastern coast of Honshu Island.  He was in Tokyo, Japan the same time as Brigadier General Douglas MacArthur, who was fired by President Harry S. Truman in 1951 because of the constant friction between General MacArthur and the Joints Chiefs of Staff in Washington.

Tinner mentioned that it is believed that the decision to drop the atomic bombs was another reason why there was a constant friction between General MacArthur and the Joints Chiefs.   President Truman fired General MacArthur on April 4, 1951, six years later.

He said that General MacArthur was a popular General in the United States who believed that dropping the atomic bomb on Japan probably would cause World War III.  And General MacArthur disagreed over foreign policy in Korea, he also wanted to end communism for good by finishing off China while it was still weak.  President Truman and his advisers were hold-over’s from the communist ridden Roosevelt Administration, and they would not tolerate such actions and insubordination from General MacArthur.

When Tinner was stationed at Fort Sam Houston in San Antonio, Texas he was an engineer who helped build bridges and roads while at Fort Sam Houston, the Philippians and in Japan.  When he was in the Philippians and Japan he and the other approximately 268 soldiers lived in tents. However, although the weather was cold in Japan, the tents kept the soldiers warm and dry, even in the rain.

Tinner is a faithful member of the First Baptist Church of Hamilton Park “First Church” where Dr. Gregory Foster is the Senior Pastor.  He shared First Church will honor all veterans starting with breakfast and continuing through morning worship on Sunday, November 14.

Tinner has been married to Phemia Tinner for 62 years; they live in Hamilton Park and are the parents of six children, Beverly, Ruena, Rebecca, Regina (Lawrence), Reginald (Iris) and Wilford (Peggy).

Their pride and joy are their grandchildren, Naarah, first grandchild of the Tinner’s is a graduate of Austin College in Sherman, Texas; Joshua; Ebony, a junior student at the University of North Texas in Denton, Texas; Jordan; Lee Ann; Jared; Leeah; Joseph; and great grandson, Joshua, Jr.

Reflections on the massacre of the Buffalo 10 and racism