You weren’t really sick at all.

You felt fine, in fact, but you said you had a headache, your stomach hurt, and you weren’t up to going to school. The truth is that you really weren’t up to the quiz in History, the test in Physics, drama with friends, a tiresome situation, homework undone, or an embarrassment that just wouldn’t go away.

So you faked sick. Whatever. It happens. 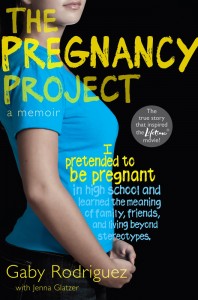 But how far would you fake? Would you be willing to live with deception for nearly your entire senior year?  Author Gaby Rodriguez did it in order to make a difference, and in her book “The Pregnancy Project” (with Jenna Glatzer), she explains.

While most kids have some idea of what they want to be someday, Gaby Rodriguez knew what she did not want to be.

She didn’t want to be a teen mom.

It would be a hard legacy to avoid, though. Gaby’s mother was pregnant at fifteen. All of Gaby’s older sisters were pregnant in high school, and some of her brothers were fathers before they were out of their teens. Everybody in their Oregon community figured that Gaby would follow suit. It was practically a “tradition,” in her family.

But Gaby knew what happened when a girl got pregnant while still in high school. For one, her education suffered and for Gaby, that was not going to happen. She was going to college, end of story.

But then she began to think… what would people say if she did get pregnant? Would their attitudes toward her change? What would it be like to live the stereotype?

Since her senior project – mandatory for graduation – was looming, she decided to get permission to try a bold experiment. With the help of her mother, boyfriend, best friend, and a few trusted teachers, Gaby let her classmates and her siblings believe that she was expecting a baby that April.

Enduring stares and whispers, nasty comments and disappointment, Gaby thought a few times about quitting – but she didn’t, even making a “bump” out of clay and padding.  She thought she’d learn a lot about that which some girls think is “cute.”  But there was nothing cute about being pregnant – even when a girl really wasn’t.

Pure bravery.  That’s what you’ll find in “The Pregnancy Project”, along with a dash of brilliance and some wide-eyed amazement at what author Gaby Rodriguez discovered before, during, and after her senior project.

And yet, what Rodriguez (with Jenna Glatzer) learned isn’t nearly as important as the guidance she offers girls in this book. The authors are blunt in sharing Rodriguez’s experiences: the pain of disappointment; the hurtful comments from supposed-friends; the smug, yet unwarranted, “I-told-you-so” remarks; and the anger that came as a surprise. Wrapping it up, Rodriguez is firm and level-headed in her advice for sexually-active teens and girls who are contemplating pregnancy anyhow.

And if that’s you, stop what you’re doing right now and go get “The Pregnancy Project.” It might change your mind because this fake pregnancy was definitely for real.