NDG Bookshelf: The One:The Life and Music of James Brown

No matter what you do, you couldn’t seem to sit still.

First, your foot started bouncing and your head joined it. Wasn’t long before your shoulders were wiggling like they weren’t attached to your spine and then you were on your feet, shaking your back-end in time with the music. 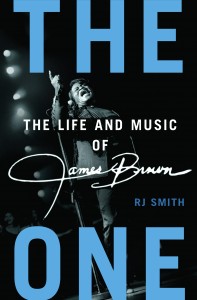 The tunes you grew up with can do that to you. But you can blame it on the beat, as you’ll see in the new book “The One: The Life and Music of James Brown” by RJ Smith.James Brown was never supposed to live.

For most of his life, he bragged that when he entered the world in May, 1933, he was born dead but his Aunt Minnie blew into his lungs and brought him back to life. That, and the abandonment of his mother were two of his most-repeated stories – although the latter was only partially true.

Though he was born in North Carolina , Brown’s father moved the family to Augusta , Georgia , in the late 1930s, in search of a better life. They settled in The Terry, which was shorthand for “The Negro Territory,” where black-owned businesses thrived. One of the businesses was a cathouse run by Brown’s “Aunt Honey.” She gave the boy a roof over his head, but she beat him regularly, too.

Violence was, in fact, a way of life for James Brown. His parents fought often and, growing up, Brown considered himself a thug. He was known for his fearlessness and fast fists (he was briefly a boxer), and for his love of firearms. In later years, Rev. Al Sharpton recalled that Brown often carried a gun.

Despite his tough streak, though, Brown was known to be gracious and people loved him. He was a savvy womanizer who knew how to play an audience, whether it was one or one hundred thousand. He knew that theatre was what people wanted, and he gave it to them – but there was more to James Brown than capes and curls.

He was very politically active, and counted presidents among his friends. He worked hard on matters of civil rights, and once “saved” a city from being ruined by riots. Generous even in his last days, he was helping charity organizations when he died in December, 2006.

How much more than music is there to a man?  “The One” (so-titled for James Brown’s beat-count) tells us, and it’s a good story.

Author RJ Smith brings his readers a sweeping and grand biography of the Godfather of Soul, and he lets us see the good and the bad in that life. Though this book can be a little longish at times, I really liked the behind-the-scenes tales of the James Brown that younger fans might not know.

Smith shows that there was a deeper Brown than what’s seen on old video clips, and that made me smile.

If you’re up for a bio that will make you hum along, then “The One” is the one you want. Read this book and you’ll feel good!