NDG Bookshelf: I Can Barely Take Care of Myself speaks to the folks who enjoy having no kids 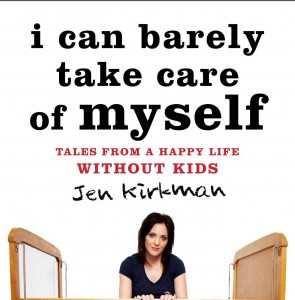 This week, two of your friends broke the news: they’re pregnant.

One’s due in October, the other in November. Heavy sigh.

It’s not exactly that you’re anti-kid. No, you like kids … as long as they’re not yours, and you’re pretty firm on that. And in the new book,  I Can Barely Take Care of Myself by Jen Kirkman, you’ll find a kindred spirit.

If there’s a chance to fly somewhere for the weekend, Jen Kirkman is on it. That’s one of the perks of being child-free, she says. She can choose the lifestyle she wants, without “dragging a kid around” or forcing a child to adapt. She can go anywhere for her comedy career because, after all, “improv and child rearing are not so different.”

But many people are not okay with her decision to remain child-free, though she doesn’t know why such a personal choice should matter to them. It might be that “people who want kids and people who have kids have secret meetings where they come up with… talking points.” The arguments they give her are varied – but similar.

People say she’s young and she’ll change her mind, but Kirkman is steadfast. The only child she wants to indulge is her inner one. They say she’s “selfish,” but she wonders how it’s selfish to avoid giving birth to an unwanted baby. They say she’d be a “really good mom,” which may be true but she doesn’t want to test that theory. They warn that if she doesn’t procreate, she won’t have anybody to care for her when she’s old. She says there are nursing home attendants for that.

Even when she got married, Kirkman was clear about her decision, “making certain” that her husband absolutely didn’t want children. He didn’t, and their parents were supportive. Which is good, says Kirkman, because when parents start asking for grandkids, everyone knows what they’re really saying and who wants to think about that?

“It’s time for the bullying… to stop,” says Kirkman. Having kids is a choice. Shouldn’t not having them be a choice, too?

You love your nieces, nephews, and friends’ kids. You really do, but if you don’t know what to say to people who try pushing you into parenthood, then “I Can Barely Take Care of Myself” is the book for you.

Author Jen Kirkman is a little grumpy and quite defensive about her position here – for good reason – but she’s not militant about it. Instead of getting livid, Kirkman puts her comedic talent to use by snarking to her readers about the ridiculousness of baby culture, overly-enthusiastic parents, and total strangers who feel it necessary to publicly pry. And since it’s a good bet that those readers feel the same way, this book may very well strike a funny bone.

While parents or parents-to-be might laugh at this book, I think it’ll be better-appreciated by anyone who’s made a negative decision on the “Baby, maybe” question. If that’s you, then you’ll love I Can Barely Take Care of Myself.  No kid-ding.

I Can Barely Take Care of Myself: Tales from a Happy Life Without Kids by Jen Kirkman, $22