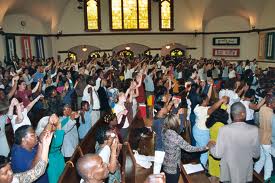 WACO – Congregation size has an impact on how people view the reasons for racial inequality in America, according to a new study by researchers at Baylor University and the University of Southern California.

Those who attend very large congregations do not tend to attribute social divisions between blacks and whites to discrimination or lack of quality education, but to something other than structural failings in society, said Ryon J. Cobb, a postdoctoral research associate at USC’s Roybal Institute on Aging.

“Size of the congregation matters above and beyond denominational affiliations, religious traditions and political beliefs,” he said. “It’s not just that you attend or that you pray, but where you go.”

Cobb and Baylor University sociologists Kevin Dougherty, Ph.D., and Jerry Z. Park, Ph.D., and doctoral candidate Samuel Perry of the University of Chicago’s sociology department presented their findings on Monday in New York City at the 75th annual meeting of the Association for the Sociology of Religion.

The researchers drew upon a sampling of more than 3,000 individuals from data from the National Congregations Study and linked it to individual records from the General Social Survey.

Cobb noted that over the past four decades, the percentage of people attending larger congregations has increased, and researchers wanted to examine the role of congregational size in shaping attitudes about racial inequality. Previous research has shown that various aspects of Americans’ religious lives shape Americans’ understanding of socioeconomic divisions between blacks and whites in America.

“Large congregations are more likely than smaller congregations to attract members of multiple races,” said Dougherty, an associate professor of sociology in Baylor’s College of Arts & Sciences. “Our research suggests that bigger congregations do little to challenge prevailing views on racial inequality. The larger the congregation, the less likely a congregant is to accept discrimination or other structural explanations for the economic gap between blacks and whites. It’s hard to solve a social problem when people disagree about its source.”

In previous studies, racial background and political party identification were the primary drivers of racial attitudes and awareness of racism, said Park, an associate professor of sociology at Baylor.

“African-Americans and self-identified Democrats tend to agree that lack of quality education and systemic discrimination explain the socioeconomic gap between blacks and whites,” Park said.”When we account for congregation size, racial identity and political persuasion still remain strong predictors of one’s beliefs about inequality. This suggests that the context of worship matters less since African-American believers in large congregations are more aware of systemic racism than their white counterparts in those same congregations.”

Further research is needed to explore the reasons behind why those in larger congregations view racial inequality differently, Cobb said.