Recycled smartphones used to save rainforests 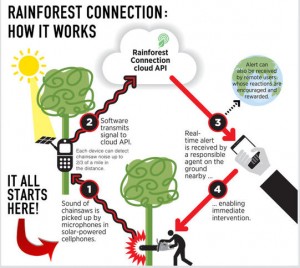 An old cell phone is encased in solar panels, perched high in the tree canopy in the middle of the rainforest in Sumatra, Indonesia. It’s constantly listening to the sounds of the forest — the insects, the leaves, the wind, the hundreds of species of animals.

Inevitably, the phone will catch one more sound: that of a chainsaw, cutting down a tree up to one square mile away. The sound and location data is automatically sent to the cloud, and an alert is sent to rangers patrolling the forests who can stop the loggers in their tracks.

Stopping them could change the course of climate change. About 17% of greenhouse gas emissions come from illegal logging, according to the World Wildlife Fund. One of these devices protects enough trees from logging to prevent 15,000 tons of carbon emissions from entering the atmosphere.

Rainforest Connection is the startup behind this project, and it was recently fully crowdfunded on Kickstarter, raising $167,000. The goal was $100,000. It’s no $5 million like the Veronica Mars movie raised, but that’s not the point.

The Rainforest Connection team is trying to do much more than just save the rainforest and decrease greenhouse gas emissions. They want to completely transform how we understand and use technology to solve global problems. It’s an experiment, and so far, it’s worked the way they hoped it would.

“We showed we had an idea that was not the run of the mill, save the rainforest — because frankly, those don’t get very well funded from crowdfunding perspective,” said Topher White, co-founder of Rainforest Connection.

“We’re trying to do something a little bit fresh, were trying to show our idea is accessible enough that you can explain it in a two minute video. Our point is largely to say they can become part of it — streaming live audio [and getting alerts]. It’s a totally new way of engaging with the rainforest.”

Read more about this project here.

Much has been written about how low the African American unemployment rate had gotten prior to the COVID-19 pandemic, but movement toward economic parity...
Read more