How the Myth of the Strong Black Woman Hurts Rape Victims 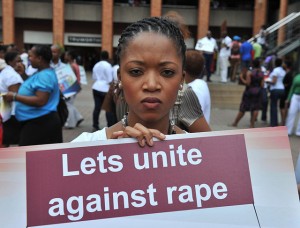 FIRST IN A SERIES

A woman gets raped every 2 minutes in the United States. According to the U.S. Justice Department, nearly one of every five Black women – 19 percent – are raped each year. Many experts suspect those figures severely understate the problem. For example, research by the Black Women’s Blueprint, Inc., a New York City-based civil and human rights organization of women and men, reports that 60 percent of Black women have been sexually assaulted by the time they are 18 years old.

Whatever the actual number, too often, the victims – including a surprising number of males and young girls – suffer alone. Efforts to discuss the abuse are usually met with disbelief or a feeling that such behavior should be quietly swept under the rug, as though ignoring the problem will magically make it disappear.

As a matter of policy, news organizations generally withhold the names of rape victims. But Black women in particular are beginning to break this silence, bravely coming out of the shadows to publicly reveal their names and faces and share their painful stories in hopes of exposing and ending this all-too-common violence. This series by NNPA Washington Correspondent Jazelle Hunt examines rape in the Black community and the long path toward healing.

WASHINGTON (NNPA) – For 20 years, Sharita J. Lee was numb. She did not cry. She did not love the men she dated. The only emotion she could muster was rage.

But that changed recently when she caught wind of the storm of sexual assault allegations involving Bill Cosby, America’s favorite TV dad. One by one, more than 30 women lodged charges against the comedian, some dating back 45 years. And one by one, their revelations were met with skepticism, personal attacks on the accusers, and even outright scorn.

“Until then, I had thought about [my assault], but I didn’t have any emotion about it,” Lee recalled. “I wouldn’t have felt anything until I read that article,” Lee said.

After reading the article about comedian Hannibal Buress’ jab at Bill Cosby, Lee scrolled to the comments section. She couldn’t believe how many people questioned why these women were coming forward decades later. Appalled, she opened her laptop, and penned all the gory details of her rape and its aftermath for the world to see. Her account was published on a blog just before Christmas.

The topic of rape has not only been revived by the controversy surrounding Bill Cosby but also by misbehavior in other segments of society. For example, dozens of high-ranking military officers have been fired for rape or having inappropriate sexual affairs with women within and outside their command.

Rape on college campuses has received wider coverage following a series of high-profile campus rapes, including one at the United States Military Academy at West Point. The Department of Education announced last May that it is investigating 55 colleges for mishandling complaints of sexual violence, a figure that has since risen to 90.

Last week, two Vanderbilt University football players were found guilty of raping an unconscious fellow co-ed and two more former football players are awaiting trial. And Florida State quarterback Jameis Winston, a former Heisman Trophy winner, has been dogged for more than a year amid allegations that he raped a FSU student in December 2012; an attorney for the student announced plans to sue the university.

Most Americans do not know as much about rape as they think.

According to the Department of Justice:

It took Sharita Lee close to two decades to truly break her silence.

Two decades ago, she was a 20-year-old New Orleans native serving her country as a member of the U.S. Navy. She had joined the military to distance herself from home, where her stepfather physically abused her mother, who was battling alcoholism.

But she returned to New Orleans immediately when she learned her grandfather was on his deathbed. During her visit, she ran into a childhood friend at her uncle’s house, and the two caught up. A few hours passed as they laughed and reminisced on the couch. Then, Lee got the call that her grandfather had died.

Abruptly, in the middle of condolences and small talk, he lunged at her. In a fluid flurry, he grabbed her legs and pulled her toward him. He pinned her knees to her chest. She shoved him. Unmoved, he yanked the back of her pants up to her thighs. He was a foot taller and outweighed her by 100 pounds. She was stunned.

“I would’ve never thought, prior to that moment, that that was something he had done before, but it happened so fast,” she said. “I couldn’t even say ‘what happened,’ I just felt him go in. In my mind I’m thinking, ‘Wow, is this happening, are you serious?’”

Afterward he got up, apologized, kissed her, and left. She didn’t move. She couldn’t speak. When he was gone, she got up, cleaned up, and cried. Then she carried on as if nothing had happened.

“Every time I think of my grandfather, that comes to mind,” she says. “My grandfather died, but I was supposed to go and see him that night. And I didn’t go because I was dealing with my friend. And that friend raped me. It’s like, oh my God, if I had been where I was supposed to be – you know, all the would’ve, should’ve, could’ves.”

At the time, Lee told exactly one person: her then-boyfriend, when he came to visit her on the Navy base after her grandfather’s funeral.

“He responded by calling me a whore. He said I invited it, and cheated on him, purposely,” Lee recounted. They argued all night and ended the relationship. The reaction pushed her into stoic silence. “I never told anyone else,” she said. “That was the first time I actually went that far, and for his reaction to be the way it was…I felt humiliated but I also felt unworthy.”

Slowly, she lost her bearings.

“I became very promiscuous. I put myself in the mind of a man. However they thought that they could handle a woman, is how I began to handle them,” she says. “I know I was angry and bitter for some time. I was drinking a lot – try to couple that with being in the military – and I was having sex a lot.”

Her pain hardened to numbness, then curdled into a bad temper, worsening as years slipped by and hardship bubbled up. There was the birth of her first child and a young and unhappy marriage and then divorce at 25.
.
“I was 28 when I first sought therapy. I went for depression, because my brother was murdered. I was having anxiety attacks, but I couldn’t cry over it,” said Lee. “I realized I’d hit rock bottom in my emotions, or lack thereof. I knew I was to my limit with not dealing with anything.”

The Path to Healing

Today, Lee is the only person in her immediate family who has sought professional help as part of dealing with her trauma.

“People are afraid to go to therapy – my mom is afraid, in my opinion, that she is going to hear the absolute truth. It’s facing your truth, I think, that’s hard for people.

“… The biggest thing for me was allowing myself to deal with whatever hurts I had buried. I had to have healing in my own home. I told my husband and my sister things…I’m not a writer, but I wrote…dealing with my mother, stepfather, and my father, writing letters to them…. As time went, I felt better,” Lee says.

“It’s like, OK, I was raped. But as I get older and realize it’s affecting my relationships…what are you going to do to change it? You have to go find help for that. Because ultimately, you’re a prisoner in your own mind, and in your own heart.”

Next in the series: Rape’s other victims

The project was made possible by a grant from the National Health Journalism Fellowship, a program of the University of Southern California Annenberg School for Communication and Journalism.)

New Year…New Medicare Advantage Plan! What If It’s Not Working For You?