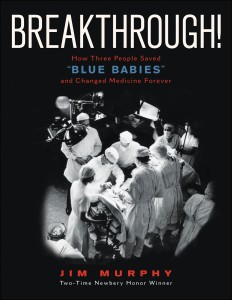 Nothing beats recognition when you’ve finished a project. Good job! Well done! Hearing those things is pretty awesome. But imagine working silently for years of your life while saving lives, and almost nobody notices. In the new book “Breakthrough!” by Jim Murphy, you’ll read about one man’s accomplishment and how it went nearly ignored for decades.

At just about 8 pounds, eighteen-month-old Eileen Saxon was obviously small for her age, and she was weak. Doctors couldn’t agree on whether she could survive surgery or not, but they did agree on one thing: she would die without it.

It was late November, 1944, and Dr. Alfred Blalock was standing in a surgical room, in front of Eileen’s little body. Behind him was his assistant, Vivien Thomas, an African American man who’d perfected the procedure that was to be performed.

They were about to make history.

Fourteen years before that night, thirty-one-year-old physician and researcher Blalock, a white man born of privilege, was looking for an assistant in his Baltimore laboratory. A carpenter by trade, Thomas had grown up in an industrious family that put an emphasis on education; he’d been saving his money to go to medical school, in fact, when the Great Depression erased it. His curiosity appealed to Blalock, who hired the African American man for twelve dollars a week.

Despite racial differences and an initially rocky working relationship, the two men eventually got along fine and everything might’ve continued as it was – until Dr. Helen B. Taussig came along.

Taussig was an anomaly: she was female, at a time when few doctors were; she was also dyslexic and had a hearing disability, but she was laser-focused on treating babies born with heart defects. She knew there had to be a cure – so she took her ideas to Blalock, who instructed his assistant to start researching.

And he did: it was Vivien Thomas who discovered how to save the lives of those babies and children. It was Thomas, a “reserved and quiet man,” who engineered the tools to do it. And it was Thomas who was almost ignored by history…

Much as I loved it, I struggled with “Breakthrough!”

The peeks back at mid-century medicine are fascinating, but parents should be aware that there’s quite a bit of detail about animal research, which may greatly bother sensitive kids. Author Jim Murphy is quick to offer humaneness, but I shuddered.

And yet, there are bigger things that kids will find disturbing. They’ll likely wonder how a brilliant African American man was passed over by fame, while his colleagues were lauded. Murphy is quick to explain that, too; his thorough research is interesting and easy-to-grasp and I think readers will be happy to see a decent ending to this particular chapter of discrimination.

Though there are plenty of medical terms and advanced language in this book, I think kids as young as 13 should be able to handle it, especially if they’re science-minded. Heed the cautions and, for them, “Breakthrough!” is the way to go.