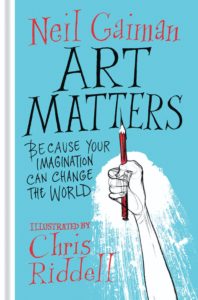 That’s what most people think you’re doing when you’ve got pen in hand and paper in front of you: just idly making squiggles and amusing yourself. You, however, know that what you’re really doing is letting your ideas, your creativity, pour into the world. And in “Art Matters,” author Neil Gaiman and illustrator Chris Riddell know it, too.

Sometimes, it might seem (at least to others) like a little bit of magic: with a writing tool, a keyboard, or stylus, you can make something out of almost nothing. Nothing – except the creativity, you carry in your head.

Gaiman knows how important that is. He knows how fragile ideas are, and that they can be squashed just as easy as they can be grown. But once an idea is out in the open, it’s stronger and there’s usually no turning back: it will forever be “hiding behind people’s eyes,” whether it’s good or “vile.”

On the subject of books, Gaiman says you should read a lot because “fiction builds empathy.” Reading will “slightly change” you, as you see the world “through other eyes…”  It’s also essential that we “understand what libraries and librarians are” and that we know what they do.

“If you do not value libraries you are silencing the voices of the past and you are damaging the future,” says Gaiman.

Taking your ideas further won’t be easy, as he shows in his final chapter.

Starting out in his career, he set his eye on a fictional “mountain” that he wanted to reach someday. He accepted jobs that took him on journeys and that made him write about many different things, which was good because he “became a better writer the more [he] wrote…”

As for your future, remember that if you don’t know what you’re doing at first, “This is great” because then you can make your own rules. Use your creativity to find adventure. Don’t copy anybody, because they’re not you.

And finally, in your creative process, “let go and enjoy the ride because the ride takes you to some remarkable and unexpected places.”

Just by quickly paging through “Art Matters,” you’ll see that this book isn’t very big. It’ll probably take you maybe a half hour to read. But what you’ll find inside maybe some of the most inspirational, important notions a creative mind will ever see.

Here, author Neil Gaiman splits his thoughts on the written word into four sparse chapters that will offer comfort to those who feel most at ease with a pen in hand. That means that this book is not just for writers and book lovers, but also for those who think in cartoons and oils. It’s a book that, through its prose, seems to free its readers of the “shoulds” of a budding career, and it’s also a bit biographical.

Add in illustrations by Chris Riddell that give this book energy, and anyone ages fifteen and up might feel their imaginations soar. For that, reading “Art Matters” is a great idea.

NDG Book Review: ‘Where You Are is not Who You Are’

NDG Book Review: ‘On Juneteenth’ is a fast, insightful read