NDG Bookshelf: The Organ Thieves is a nonfiction medical thriller

It gives you such a great feeling.

Yep, generosity: you can’t beat it. To hand over a gift, to watch someone smile, that’s the best. Providing a life-saving item or needed supply gives you a warm-fuzzy from your toes on up. You can’t beat the feeling you get from giving but, as in the new book “The Organ Thieves” by Chip Jones, be sure your heart is in the right place.

Because of its unique location, easy to reach, just north of the South, the Medical College of Virginia in Richmond enjoyed a stellar surgical reputation in the 1960s. 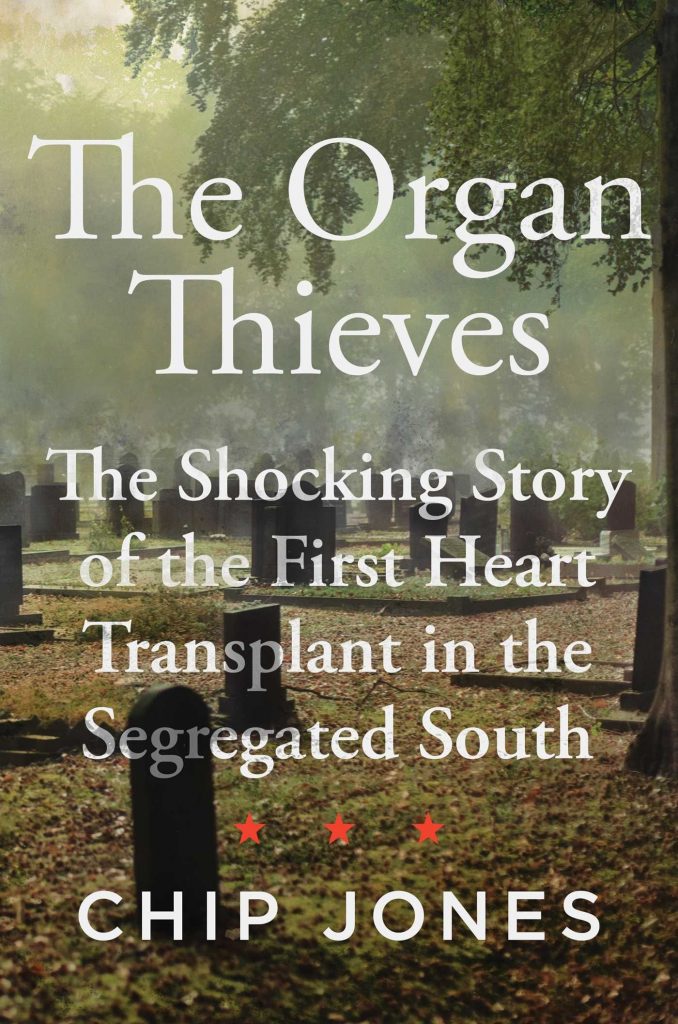 The “MCV” had overcome so much: almost literally, its closets were full of skeletons from Civil-War-era resurrectionists and early-20th-century human experiments. Racism was an ongoing issue, too. But in 1966, the optimism within MCV’s walls came from two surgeons, both hoping to become pioneers in heart transplantation.

Doctors David Hume and Richard Lower were both experienced in transplanting organs in animals and in humans, and both were well-regarded enough for South African surgeon Dr. Christiaan Barnard to request time to work with and learn from them. But transplanting a heart, human-to-human, would be different than anything they’d done before. There was no chance to rush; they had to get it right, while being mindful of ethical matters.

Where is the line between life and death? Technology available in 1967 couldn’t answer that question enough, and therein lay the dilemma. The obvious best donor then was still alive but not really; the obvious best recipient of a transplant was otherwise in great health. These were not the only considerations, but they were the biggest.

There were laws to follow, and rules to heed, but shortly after Barnard beat Hume and Lower in the race to be first with a human heart transplant, the pressure was on. Waiting in the wings was an ailing white businessman with a bad heart. So when a fifty-four-year-old Black man was brought to the hospital with head injuries, the surgeons made their moves…

NDG 9/24: Trump: A man with no political platform

Murder, or medical marvel? When it comes to health-related breakthroughs like that in “The Organ Thieves,” we often read of “firsts” but not-so-often about subsequent, likewise notable, milestones achieved, and even more rarely of controversy tied to the event. But here, author Chip Jones tells all of the above, anchored by accusations of crime with racism at their core, a tale that still lingers for many concerned.

That’s heartbreaking and painful to read about, although some may argue that there was a modicum of gain here, in medical knowledge and in eventual legislation. Also up for debate: did a later-famous surgeon have a role in the push to break the rules? Were those rules even broken? Jones leaves courtroom records – and readers to self-argue these details of that day in 1968.

Though this is a nonfiction book, fans of medical thrillers will devour it. Readers who love true medicine stories, history, and courtroom drama will love it, too, so find “The Organ Thieves” because you can’t beat it.

By Terri Schlichenmeyer This year, you are going to roar. You’re going to seize every opportunity, wrestle every bad habit to the ground, and do better...
Read more
NDG BookShelf

By Terri Schlichenmeyer Uh-oh! Everybody’s watching. They’re all looking at you and now what? Your voice won’t work when all eyes are pointed your way. You...
Read more
NDG BookShelf

By Terri Schlichenmeyer You’ve got mail. No, real mail, delivered by a carrier in a mailbox outside your door. It doesn’t happen very often and it’s...
Read more
NDG BookShelf

NDG Book Review: ‘My Life in the Purple Kingdom’

By Terri Schlichenmeyer You had every intention to stand still that night. Nice try. Your shoulders were shimmying ten seconds after you stepped to a beat,...
Read more