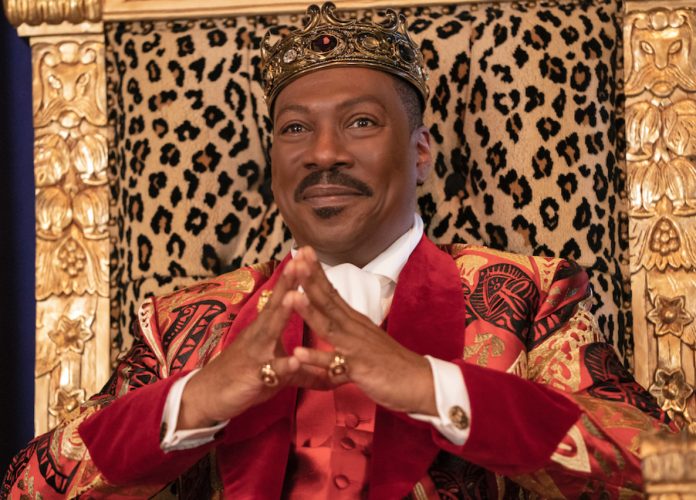 Nothing wrong with a little nostalgia. But if you’re looking for a comedy revelation, this isn’t it. It’s an ‘80s throwback with a comic superstar, his merrymen/women and a tinge of Wakanda fever. Grab a seat and be prepared to yawn before you laugh hysterically.

If 1988 feels ancient to you, you’re young, go sit in a corner. If that era brings back pleasant memories, step up. Things have happened since back in the day. The larger public has learned what the African American community has known all along, being Black is cool and being Black in Africa is mythically awesome. That’s what made the original Coming to America iconic. 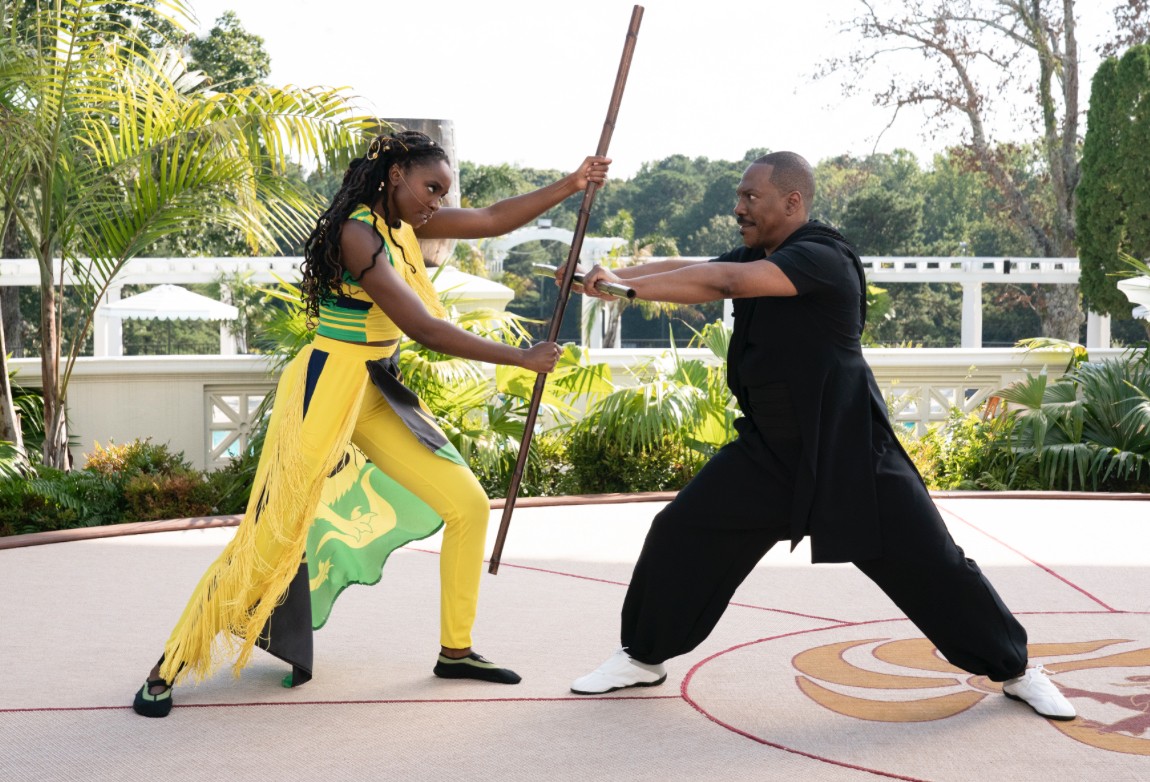 Long, long time ago, Akeem Joffer (Eddie Murphy) was the young prince of Zamunda, a fictional country over in the motherland. Rather than taking part in an arranged marriage, as expected by his father the king (James Earl Jones), Akeem eschewed tradition. He and his wingman/coat-holder Semmi (Arsenio Hall) went to Queens, New York, looking for a wife. He found Lisa (Shari Headley), a commoner, the daughter of Cleo (John Amos) a man who owned a fast-food restaurant named McDowell’s. The two lovebirds married and lived happily ever after—until.

That’s the old plot. The step off point for screenwriters Kenya Barris, Barry W. Blaustein and David Sheffield. It’s like they cheated off an old term paper to write the new formulaic one. Innovation, wild imagination, uncanny scenes or profound dialogue—nope. Expect, with Barris at the helm, inside culture jokes, bawdiness (an attempted male adult circumcision. Ouch!) and Black-ish humor. Prepare for a few surprises (a welcomed touch of female empowerment). There are plenty of laughs, one-liners, sight gags, rivalries and problems to solve. None add up to much more than an excuse to give Eddie Murphy one more run at Akeem before we all go to the elephant burial ground.

Director Craig Brewer, who guided Murphy to a career-redefining performance in Dolemite Is My Name, helms the project. Comedy is his stomping ground, but not much else. He works in a Black Panther angle with a few martial arts warrior fight scenes—none particularly convincing. Romantic moments are shallow at best. Settings in Africa and New York’s largest and most diverse borough provided opportunities for stunning exteriors of African plains or bustling streets, but few exist. That’s because the production was largely shot at Tyler Perry Studios. Pageantry, elaborate processions, fancy royal bedrooms, neighborhood barbershops, it all looks fake. What isn’t bogus are the comic performances, which Brewer nurtures perfectly.

These days, King Jaffe Joffer is ailing, old, contemplating succession and mortality. He turns to Semmi with certain derision: “I will be dead soon. Why couldn’t it be you?” Old laws dictate that Prince Akeem’s successor must be a male heir. That displeases the prince’s eldest daughter Meeka (Kiki Layne, If Beale Street Could Talk) and his two other offspring (Akiley Love and Murphy’s real offspring Bella Murphy). Marrying Meeka off to General Izzi’s (Wesley Snipes) useless son Idi Izzi (Rotimi Akinsosho) could have two benefits: a future male prince and uniting the two, potentially warring nations of Zamunda and Izzi’s country Nexdoria. It’s a plan, until Akeem discovers that, due to an old indiscretion, he has a son back in Queens. When Lavelle (Jermaine Fowler), his mom (Leslie Jones) and Uncle Reem (Tracy Morgan) show up at the palace, things get complicated.

The commissary at Tyler Perry’s studios must have been packed during the shoot. Hefty main cast. Lots of supporting roles. Extras in abundance. Murphy plays a prince, but he is truly the king of Black comedy— and luminous. The Nigerian sounding accent, wicked smiles, dramatic acting and horsey laughs. He plays a host of other characters too, the most frenetic is rock/soul musician Randy Watson, a Rick James knock off in a powder blue outfit warbling “We Are Family.” Equally disarming is Wesley Snipes as the duplicitous snake Izzi. He’s wonderfully evil. 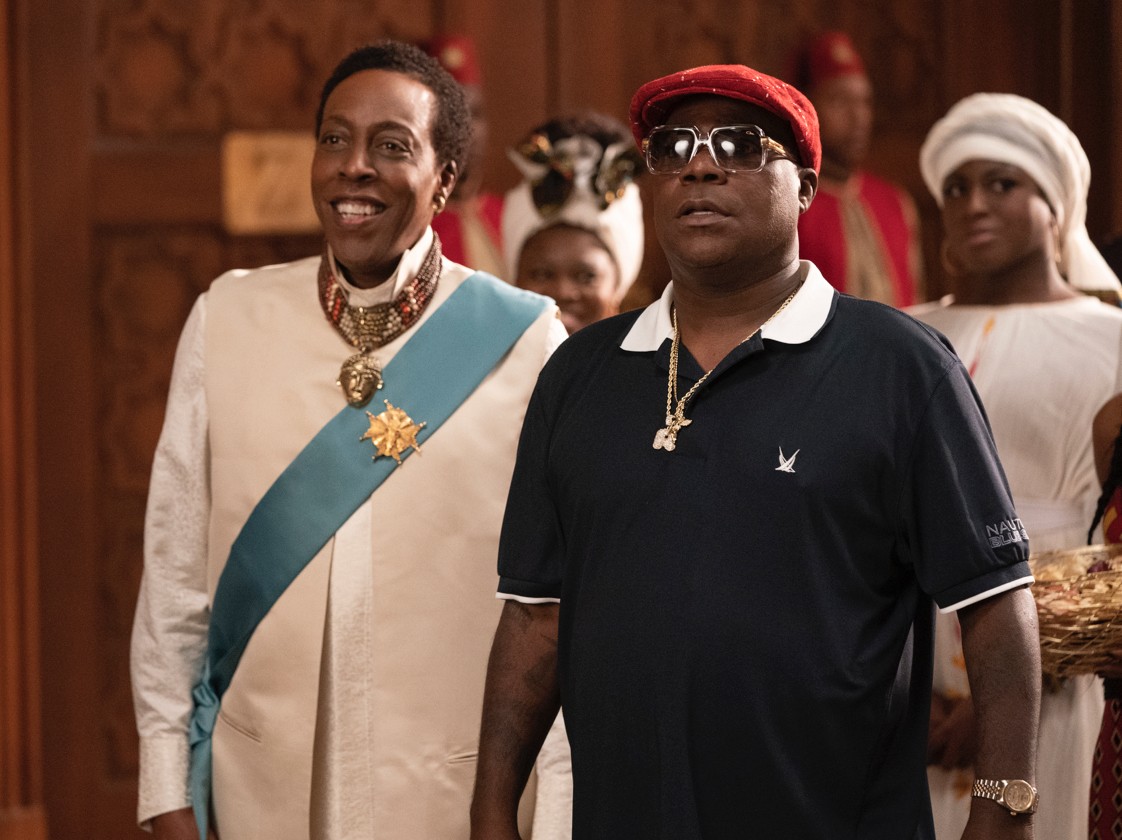 Arsenio Hall in drag could give kids nightmares. Whoever hit him with the ugly stick should be properly credited. Also begging for laughs and attention are Jones and Morgan with more nuanced performances by Layne, Headley and Nomzamo Mbatha as Lavelle’s love interest.

Tune in looking for the old days, Afrocentric culture and silly comedy and you’ll be satiated. Expect something earth-shatteringly new, and you won’t. Remember how two African interlopers once changed audiences’ perception of Queens, New York? Zamunda forever!

BAFTAs front-runner Rocks: Meet the cast of the British film ‘for brown girls that they will love and which loves them back’