Summer of Soul (… Or When the Revolution Could Not Be Televised)

It was a volatile time. Malcom and Martin had been assassinated in recent years. Civil uprisings and riots had just simmered down. The summer of ’69 was a chance for a much-needed cultural break and reawakening.

The Tonight Show… musical director Ahmir “Questlove” Thompson has flicked the moth balls off the never-before-seen, decades-old footage of the festival. The 2-inch video tapes were shot by producer/director Hal Tulchin for an unreleased 1969 doc called Black Woodstock. The tapes had languished in a basement for 50 years and Tulchin signed the rights to the masters over to Questlove just before he died in 2017. The bandleader’s task of screening, editing and assembling clips couldn’t have been an easy task. His efforts were augmented by music supervisor Randall Poster, editor Joshua Pearson and director of photography Shawn Peters.

Among the many stellar performances: R&B artists (BB King, Little Stevie Wonder, Sly and the Family Stone, Gladys Knight & The Pips); pop stars (The 5th Dimension); jazz greats (Abbey Lincoln, Nina Simone); Latin legends (Mongo Santamaria) and gospel singers (The Staple Singers, The Edwin Hawkins Singers, Mahalia Jackson). Mayor John V. Lindsay makes a cameo and activists like Jesse Jackson and Al Sharpton share their opinions on music and the state of Black life. Sharpton: “Gospel was more than religion. Gospel was the therapy for the stress and pressure of being Black in America.”

The vintage performances are edited in with news footage and new interviews from fest musicians recollecting their performances and attendees recalling their experiences. Of particular interest is the interview with Marilyn McCoo and Billy Davis Jr., who were determined to connect with a black audience who had been reluctant to embrace The Fifth Dimension, their pop group.

Together, these interviewees’ perspectives add insight and footnotes to the social/political history surrounding these unforgettable outdoor concerts. Before there was Prince there was Sly. Before Yolanda Adams, Mahalia. Before Bad Bunny, Mongo Santamaria. We know this because Questlove and his rousing, thoughtful documentary links us back to the past with this precious and rare archive. 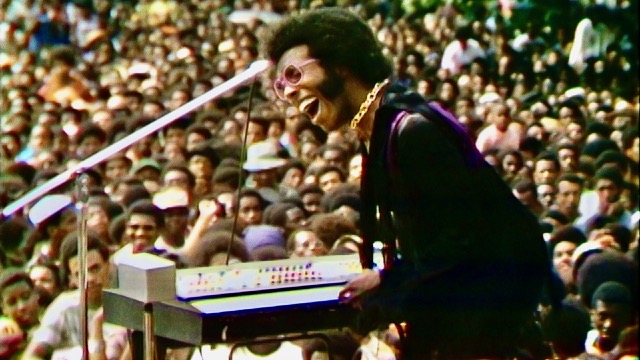 There is something so spiritual, uplifting and motivating about watching 300,000 black folks, over the course of a summer, gathered around a stage to vibe and rejoice. You need to watch this doc in a theater or on the streaming service Hulu. Why? Because the revolution will not be televised!