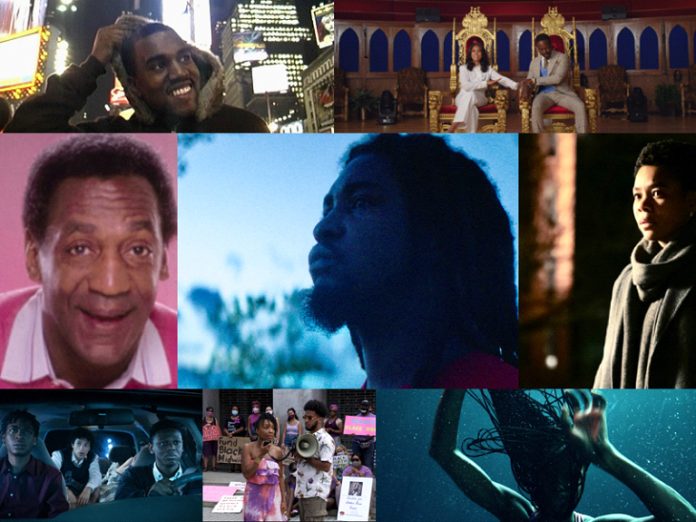 At the last minute, due to Omicron concerns, the 2022 Sundance Film Festival morphed from an in-person and virtual event to a purely digital experience. Thanks to streaming, Black filmmakers and Black films were on center stage all over the world. Check them out…

According to WHO, the U.S. ranks 60th on the list of countries with the lowest maternal mortality ratio. The Population Reference Bureau cites, “Black women are three times more likely to die in pregnancy postpartum than white women.” Directors Paula Eiselt and Tonya Lewis Lee’s illuminating documentary breaks down the contributing factors and possible solutions for maternal mortality in the aftermath of two specific women’s deaths. Shamony Gibson and Amber Rose Isaac both died after labor and a grassroots movement for birth justice and equity, in their honor, is heroically launched by Omari Maynard and Bruce McIntyre, the fathers of their children. The courageous dads, like shamans, guide you through the perils and needs for a change in obstetric care from pregnancy to births, to aftercare. 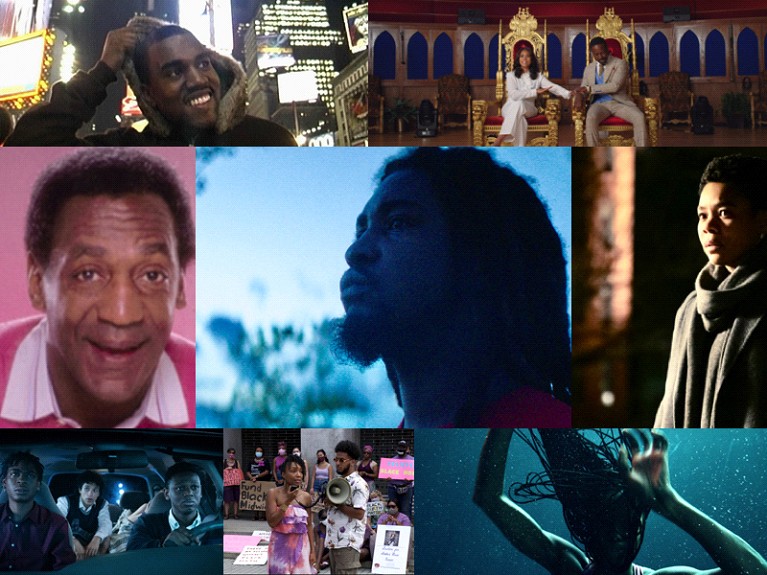 A yearning for a definitive history is the driving force of this heart-warming doc. The Cotilda schooner was the last American slave ship to bring Africans to the U.S. The imprisoned captives from Benin arrived in Mobile Alabama in 1860. The Black descendants of that ship settled in Africatown, which has since been parceled away by public domain highway projects, a lumber yard and other businesses. Still the proud residents keep their history alive, orally, passing on info, names and dates to future generations who become historians and record keepers.

Director Margaret Brown captures the spiritual experiences of these chosen Alabamians. She films their interviews just as a white journalist and white owner of a mechanic’s shop decide to look for the ship that was burned by its owner Timothy Meaher and hidden in neighboring swamps.

Brown’s chronicling of this hunt and what it means to the heirs of the Cotilda’s last passengers is never obtrusive. Her style is reminiscent of the grassroots doc Something in the Water. Culture, history, reckoning and reparations all add a richness that makes the film emotionally compelling. Grainy footage of the ship’s last survivor Cudjo Lewis, as filmed by author Zora Neale Hurston in the 1930s, is as astounding to see as an heir of Meaher’s showing up for a ship discovery ceremony. These stalwart descendants of slavery save their culture and history. Their tenacity and courage prevail in a very illuminating way.

In Weekend at Bernie’s, three white guys tooled around with a dead body in a mildly funny one-joke movie. In this similarly premised college life satire, the laughs aren’t as easy. African American director Carey Williams and Mexican American screenwriter KD Davila’s spoof delves into the hazards of Black life at a predominately white school. Kunle (Donald Elise Watkins, The Underground Railroad) is a brilliant pre-med student. His loosely wired, vape-smoking buddy Sean (RJ Cyler, The Harder They Fall) is a devil-may-care pothead. They intend to go on a legendary party circuit bender, but before their first beer pong, they discover a drunk, unconscious white blonde (Maddie Nichols) on their living room floor. A Latino roommate Carlos (Sebastian Chacon) is oblivious. The trio tries get the cataleptic girl to safety, which takes them down a deep rabbit hole of mishaps.

What’s on view is a very shallow attempt at exploring racism that turns into nothing more than a trivial excuse for comic debauchery. The very young black hip-hop influenced dialogue is the film’s strongest element. Stagnant dialogue-heavy scenes thwart most good intentions. Watkins and Cyler exhibit a Harold and Kumar chemistry that would feel better in another movie. There’s just enough story and humor here for a SNL skit. Not much more. Trying to make serious points in a pointless film is a worthless endeavor.

“Where’s Tyler Perry when you need him?!” Pastor Lee Curtis Charles (Sterling K. Brown) and his wife Trinitie (Regina Hall) run a Southern megachurch named Wander to Greater Paths. The place is near empty. Why? Evidently a preacher man being caught up in a sex scandal drives congregations away. But the duo is charting a comeback, even if it requires standing at the side of a road with placards begging for parishioners and humiliating themselves while being filmed.

The Ebo twins (writer-director Adamma Ebo, producer Adanne Ebo) start with a promising parody that descends unto a two-character thud. The dearth of solid narrative and consistent comedy leaves Brown and Hall stranded. The twins frame shots well, but don’t know how to milk moments or sustain scenes with biting verbal or physical humor. Brother Brown’s interpretation of a clueless, smarmy minister is glorious (Can I get an amen?!). Sister Hall perfectly finds the nuances of the put-upon wife (Praise be.). Funniest scene is when they drive a Cadillac Esplanade singing to a rap song, cursing and screaming like gangstas. Pity the film runs out of gas. Madea would have known what to do. Looks low budget. Feels low rent. Jesus wept.

Ten minutes into this lively documentation of 21-year-old Kanye West the unsettling contrasts between this hopeful, humble adolescent and his embittered and inflated persona these days is quite jarring. Chicago public access TV host Coodie chronicled West’s pilgrimage from Chicago to New York in the late ‘90s as he tried to transition from music producer to superstar rapper. Fuzzy-looking footage reveals all. Consider Coodie’s homage to be more like a home movie/travelogue with famous people (Damon Dash, Pharrell) than a typical doc. No video tricks. No gimmicks. No mounds of news footage, interviews etc. Just largely an unfiltered look at West fighting for a record deal at hop-hop’s holy grail, Roc-A-Fella Records.

The most touching scenes are West and his wise, nurturing schoolteacher mother who wants him to remain humble: “You can stand on the ground with your head in the air at the same time.” The most awkward scenes are watching Jay-Z, RR’s CEO, keep Kanye at bay: he wants the milk (West’s “jeen-yuhs” producing) but not the cow (Kanye as a rapper). The fly-on-the-wall filmmaking lets you cavort with family, friends, adversaries, mentors and hangers-on. Discovering West’s middle-class background explains his early brand of rap and its often-spiritual elements, which are evidenced in the making of his classic hit “Jesus Walks.” West, with no gangsta cred whatsoever, was on a mission: “I’m gonna bridge the gap to hip-hop.” And he did, with a verve and naiveté that was reflected on his smiling face. Luckily, Coodie documented the good old days, or no one would believe the 1990’s West and the 2022 Ye were the same people.

If you’re going to examine racism through the prism of a horror movie, and exploit that social ill, you’d better have all your dead bodies lined up just right. This Get Out knockoff does not. Jasmine (Zoe Renee) is a first-year student at the nearly all white Ancaster College. Gail (Regina Hall) is the new dean of students, aka Master. Both experience the slights and mockery whites can put on token Blacks. In addition, Jas’s room is haunted. Cue the ghosts, creaky noises, weird nightmares and freaky images.

Mariama Diallo’s script and direction attempt to bait audiences’ attention with racist tropes (nooses, cross burnings, racial epithets). Cheapening those real-life traumas peaks in a scene when a rap song comes on at a nearly all-white dance party and white kids surround Jas chanting the “N” word lyrics at her. The constant repulsion without any redemption or payoff is an unforgivable buzz kill. Even through the misguidance, Hall’s presence shines like the North Star. Unoriginal. Derivative. Lackluster. If you’re going to mess with the horror movie genre recipe you have to do it with better ingredients. Diallo does not.

African immigrant stories often possess an innate appeal. In this instance, Senegalese writer/director Nikyatu Jusu’s odd mixture of horror, thriller, romance and muddled family drama has the opposite effect. Aisha (Anna Diop), a twentysomething from Senegal, leaves her young son behind to find work in New York. A white couple (Michelle Monaghan and Morgan Spector) hires her to tend to their young daughter Rose (Rose Decker). The wealthy spouses are lax with pay, Aisha loses communication with her son and weird visions of a boy in rain haunt her.

Supernatural aspects and cryptic images have no context for 90 minutes of this 97-minute motion picture. Regardless of the iffy narrative choices, Jusu and cinematographer Rina Yang make a very attractive film that displays their excellent taste in staging, composition, angles, lighting, etc. Scenes look fresh and modern. The director also excels at depicting a love story between Aisha and an understanding doorman (Sinqua Walls, American Soul). Jusu shows great promise as a director. Even a genre-messy film can’t hide her talent.

Really?! Is there some explosive secret about the shamed comedian that has yet to be revealed? Stand-up comic turned documentarian W. Kamau Bell thinks so. To make his case, he assembles an exhaustive array of talking heads (Roland Martin), comedians (Hannibal Buress), rape crisis counselors and even a journalist who investigates date rape drugs. Cosby’s well-publicized fall from ’60s TV pioneer (I, Spy), to 1980s/’90s quintessential all-American boob tube daddy (The Cosby Show), to convicted, imprisoned felon is meticulously charted. Victim after victim exposes his pattern of drugging, assaults and rapes. The black community’s initial ambivalent feelings are pondered. His hypocritical jabs at young black men while he’s molesting women are documented too.

Two hours of this in-your face negativity is more than enough. Four one-hour segments are overkill. Too many clips of Fat Albert. Too much faux indignation over stupid stuff like Cosby playing an obstetrician on The Cosby Show. The barrage of info will test your patience. Also, watching folks hypothesize as they sit on expensive leather coaches, dressed like fashionistas and lit like they’re in a fashion shoot is off-putting. But credit Bell for his inventive style. Incriminating words dance across the screen and victims are noted on a horizontal calendar that pinpoints Cosby’s crimes from the ‘60s, ‘70s, ‘80s and 90s. Plus, Bell’s insights into black culture, history and the TV industry are thorough and sometimes profound.

Indicting rapists like Cosby is fair game and newsworthy. But many viewers may wish the second two hours of this doc were spent teaching women how to beware of predatory situations, detect rapists, self-defense, report incidents and find supportive aide (e.g., rape crisis centers). We have talks with our sons about encounters with policeand this doc had a chance to be an advocate for rape victims and provide a public service. It’s a missed opportunity that would have given the series some depth.

For more information about the annual Sundance Film Festival go to: https://www.sundance.org/festivals/sundance-film-festival/about.