After school and Saturday mornings were devoted to fighting crime.

There you were, seven, eight, nine years old, hard-bodied, brave, and fireproof – at least, in your mind. Along with your ancestors and others with superpowers, you were invincible. And in “Black Panther” by Don McGregor, Rich Buckler, Billy Graham, Stan Lee, and Jack Kirby, you’ll see that it all started with a “dark line.”

In the years between the middle of the Depression and the middle of World War II, over “seven hundred super-powered do-gooders debuted” in comic books, nation-wide. After the war was over, comic books continued to be popular but the super-hero genre faded to just a small group their publisher called the Justice League of America. 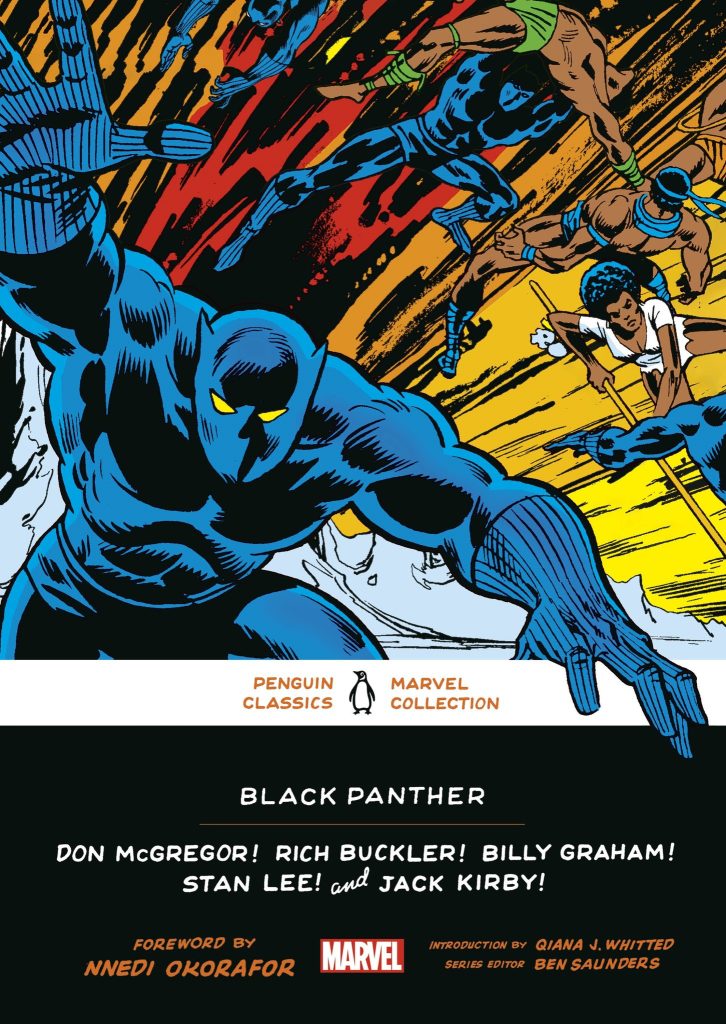 This spurred rival publisher Marvin Goodman to “sit up and take notice.” He decided that his comic book company needed its own superhero team and he partnered with several talents to create the Marvel Universe. In the early 1960s, Marvel Comics’ Fantastic Four were joined by several other superheroes “in the same story-world,” each with a unique talent; in 1966, the Black Panther became one of them.

There were a few ragged edges to the character – at first, there were “hints” that the Black Panther might spin into a comic book villain – but readers of the early story ultimately rested easier. The Fantastic Four and the Black Panther were always in good hands, both in Wakanda and elsewhere…

Imagine, says Nnedi Okorafor in her foreword, being a small child of immigrants from Nigeria, trying to visit a comic book store back when older white males were its usual customers. She fled the store then, empty-handed, and returned to comic books when she was an adult and found a character that looked like her. The earliest incarnation of that character and his comic book story are found inside “Black Panther.”

Fans can rejoice: the latter takes up the bulk of this book, chronologically and in full-color, just like the original comic books offered. But patience: before you get there, read the overview of comics in general, Marvel Comics, specifically; Okorafor’s foreword; and a volume introduction to this character. Turn to the back for an essay on the Black Panther, and plot synopses with creator’s notes. It’s the whole deal.

The bonus, for fans of both movie and comic book, is that you can read this paperback release of the hardcover book without worry. Show hard love to this version of “Black Panther” and share it, knowing you’re someone else’s hero.

NDG Book Review: ‘The Two Lives of Sara’ is an emotional read