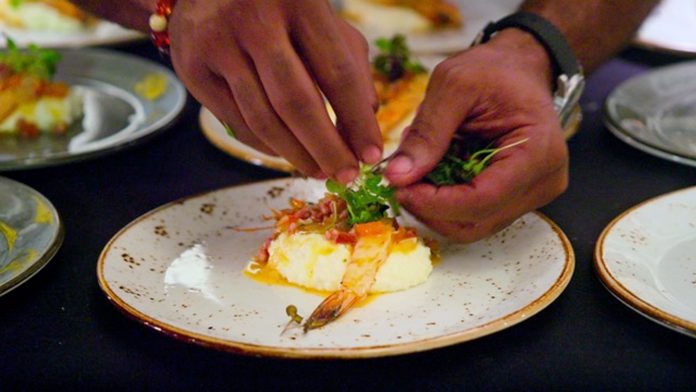 High on the Hog: How African American cuisine transformed America

It’s a revelation. The rich history of Black heritage cooking and how it has influenced American cuisine is on view in this enlightening, heartfelt and surprisingly well-crafted documentary. The host for this four-part Netflix epicurean travelogue is Stephen Satterfield, founder of Whetstone Magazine, which is dedicated to food origins and culture.

He starts his culinary journey in western Africa and continues to the U.S., making his deeply personal sojourn a voyage of self-discovery for everyone.

In Episode I, Satterfield gets an illuminating tour of Benin, by Dr. Jessica B. Harris, author of High on the Hog: A Culinary Journey from Africa to America, whose book is the source material for the docuseries. Her deep, shaman-like voice is reminiscent of Maya Angelou’s and makes you feel like you are in the presence of an oracle. Harris: “Food is how we know who we are and how we are connected.”

She and other guides, chefs (Valérie Vinakpon) and preservationists recall how African people were rounded up, enslaved, brought to boats in port towns like Benin’s Ouidah and vetted. The captives were shipped out and their food traditions came with them on their harrowing transatlantic passages to the western hemisphere. Learning that okra, yams, black-eyed peas, fava beans and rice are staples there and here is fascinating. Discovering the history of the four-kilometer slave trail that ran from the center of Ouidah to the sea and a mass grave (Cemetery of Slaves), is so sobering it devastates Satterfield and will have the same effect on audiences. 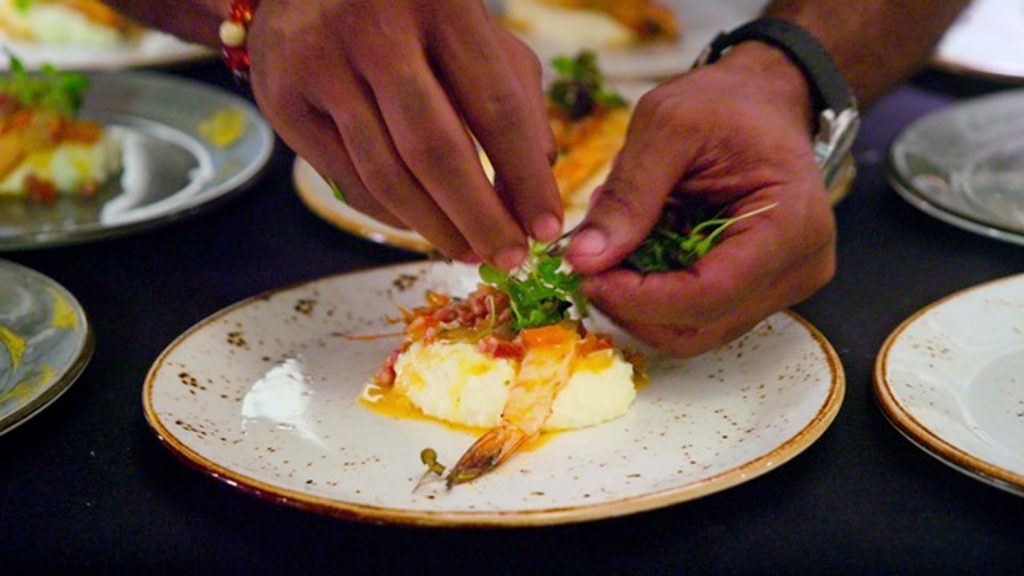 Episode 2 takes the proceedings to Charleston, South Carolina, where other emissaries chart the history of Black cuisine, with particularly profound insights from Michael W. Twitty, author of the food blog Afroculinaria and book The Cooking Gene: A journey Through African American Culinary History in the Old South.

“Cooking puts you in the presence of our ancestors,” notes Twitty. He and others expound on the essential elements of Black cuisine that influenced American food, from Carolina Golden Rice to using all parts of the pig (aka high on the hog). A very deep preservation of African life has been maintained on South Carolina’s isolated Sea Islands as manifested in Gullah Geechee culture. Viewers also learn that enslaved chefs established the palette for a new democracy, and elders to this day teach the next generations how to cook, thus preserving traditions.

Episode 3 spotlights two of the most lauded epicureans of the 18th and 19th centuries, Hercules Posey, head chef for Pres. George Washington and James Hemings, for Thomas Jefferson. The latter, brother of Sally Hemings, was the first American chef to train in France and is credited for bringing French fries and mac and cheese to America. Their careers, families and fights for freedom are known.

NDG 5/20: ‘Shop Talk’ building a relationship between communities and those who protect them

Episode 4 brings the series to a conclusion as the production ventures to Texas, highlighting the significance of the holiday Juneteenth. Satterfield is briefed on the history by James Beard finalist Jerrelle Guy, author of Black Girl Baking, who unveils some of her prized desserts (Raw raspberry-hibiscus cheesecake) and their historic significance.

NDG 5/13: Frustration continues to rise in the case of Marvin Scott, III’s death

Black America’s legacy lives on because people guard the gates of our culture. The makers of this brilliant miniseries and the guides who take us on this journey are those guardians.
Currently on Netflix.